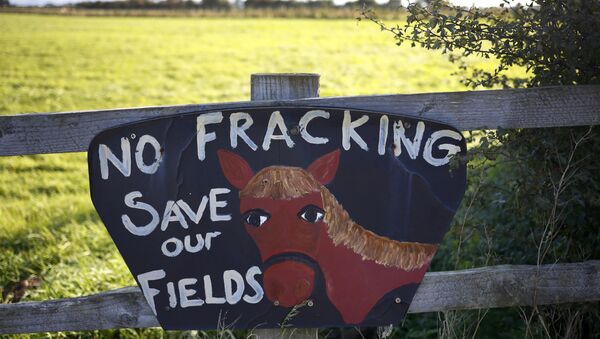 © REUTERS / Phil Noble
Subscribe
The US "is brewing another Russian scandal," this time suspecting Moscow of bankrolling US anti-fracking activists to oppose fracking and halt shale oil production. Russian experts call the allegations absurd, saying that it resembles "persecution mania."

US vs. OPEC: Shale Companies Push Oil Prices Down, Risk Losing the Market
A recent report published by US-based Politico magazine says that the US has revived its "yearsold allegations from conservative activists that Russia has funneled money to US environmental groups to oppose fracking."

"Allegations have circulated for years that Moscow has sought to discourage European countries from developing their own natural gas supplies as an alternative to Russian fuel. And conservatives have sought to extend those concerns to the US – though there’s little but innuendo to base them on," the outlet says.

Green groups however dismissed Smith’s allegations as an attempt to divert attention from all the news surrounding Trump and Russia, the magazine says.

Edge of Disinvestment: US Shale Oil Sector Under Pressure Amid Prices Slide
The League of Conservation Voters, another group named in Smith’s letter, also blasted the Science Committee’s allegations.

Fracking is prohibited in a number of European countries, such as France and the Netherlands. A number of US states, such as New York and Vermont have introduced certain restrictions on this method of shale oil and gas extraction.

"Anti-fracking sentiment in the US started bubbling up among US environmental groups as soon as the oil and gas production method started surging in the late 2000s, with the documentary 'Gasland' appearing in theaters in 2010 after a year and a half in production. Much of that opposition was driven by local activists in new gas hot spots like Pennsylvania who complained about threats to their drinking water, while major national environmental groups like the Sierra Club were slower to take up the cry," Politico says.

"Still, there is no evidence that Russian money has gone to US green groups, at least on the national level," it quotes Brenda Shaffer, an adjunct professor at Georgetown University’s Center for Eurasian, Russian and Eastern European Studies, as saying.

"And there is even less evidence that any money would have been well spent, given how hard it would be to push widespread fracking bans through the myriad of local, state and federal governments involved in permitting," she added.

Don't Blame Trump, Blame Oil: US Shale Boom Responsible for TPP Rejection
"It would be almost impossible to prevent fracking in the United States," Shaffer said.

Sputnik Radio discussed the issue with Anna Kokoreva, senior analyst at the brokerage firm Alpari, who said that the so-called "Russian involvement into US internal affairs" sentiments resemble "persecution mania."

The expert also noted that the greens seem not to have gained any tangible results; therefore it seems to be highly unprofitable to finance them. Besides, President Trump has every intention to lift a number of bans in the extraction sphere to facilitate the production of hydrocarbons in the US. Hence all the allegations are just made up.

In a separate comment on the issue, Evgeny Shvarts, director of conservation policy of WWF-Russia told Sputnik that the greens in the US have not received any money from Russia.

"In every country, the business which is lagging behind, is blaming the environmental activists for all its troubles. However none of the "green" organizations in the US would have taken Russian state money or money from Gazprom, a state corporation, for the "ordered" campaign, because the loss of  reputation among its supporters is a lot more important than any insufficient funding," he told Sputnik.