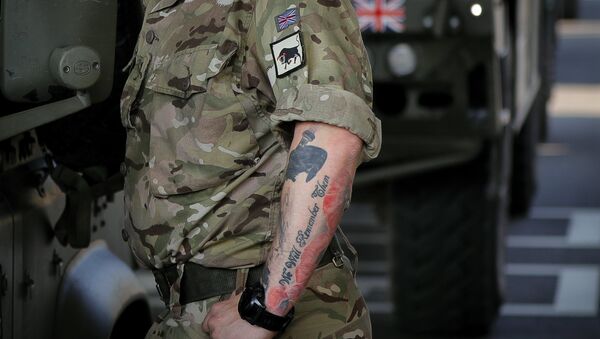 UK army personnel statistics show the number of fully trained soldiers has dropped below a previous "trained strength" target of 82,000 to 78,010 – a shortfall of 3,990 fully trained troops, and the lowest total since the 18th century – and critics say the country's military faces a "potentially very, very dangerous crisis" as a result.

The figures were published July 21 as parliament closed for summer, potentially as a way of "burying bad news."

​On top of the drop below a previous "cast iron" minimum, the number of people leaving the part-time Army Reserve (previously the Territorial Army) increased by 20 percent between June 1, 2016 and June 1, 2017 — while intake simultaneously fell 18 percent.

The figures raise serious questions about the UK government's aim to boost reserve figures to 30,000 by 2020, a figure fundamental to future armed forces planning since 2012, when then-Defense Secretary Philip Hammond announced cuts of 20,000 to full-time soldier numbers.

There are even suggestions the figures could covertly underplay the true scale of the forces' sizes, as the government has redefined the term "trained soldiers" to allow many reservists to be counted in the forces' "trained strength" numbers.

Whereas previously soldiers had to complete both basic training and more advanced training to be counted among the "trained strength" numbers, now they need only to have completed basic training.

While the Ministry of Defense is adamant the amendment was enacted to maximize the force available in the UK, rather than manipulate statistics, the alteration meant the "trained strength" of the Army Reserves rose 2,440 in the space of a single month, from 23,750 in September 2016 to 26,190 in October 2016.

The creative accounting allows the "trained strength" of the regular army to stand at 82,210, just meeting the 82,000 target set in 2012. Under the old definition of "trained strength," the number would stand at 78,010, but according to both measures, the number of trained troops is falling.

In the Army Reserves, there are 26,730 "trained" troops, just meeting a target of having 26,700 trained reservists by April.

Ever since Hammond's cutting drive, critics have suggested such projections — which would entail a boost in recruitment by 58 percent — were fantastical. In June 2015, the independent Major Projects Authority gave the plan a "red" rating, denoting a scheme that was unachievable.

Speaking to the mainstream media, Colonel Richard Kemp, who headed British forces in Afghanistan in 2003, said he was "extremely worried" by the figures, and blamed the government for "betraying" the country's "very high caliber" military.

"It is a very dangerous economy to make. The current size of the Armed Forces is the most worrying I have ever known it to be. We are facing an increasing threat, while reducing our capacity to deal with it. It doesn't take a genius to see we, as a country, are in a very dangerous situation now. The level of instability around the world is increasing daily. We are denying ourselves the ability to protect ourselves or to deter those who pose very serious potential threats to us. We will pay for this in the end, as we did in the 1930s," he said.

The figures will surely add further pressure on the government to boost spending and recruitment numbers.

On July 19, Conservative MP Bob Stewart, a former United Nations commander, described the size of the UK's armed forces as "laughable" and "disgraceful" at a Westminster Hall debate, and called on ministers to exceed the NATO target of spending two percent of GDP on defense.