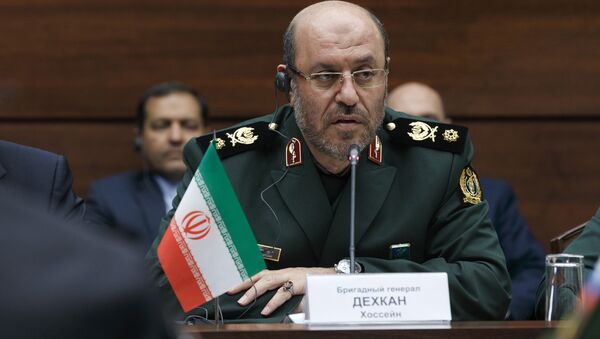 © Photo : Russian Defense Ministry
/
Go to the photo bank
Subscribe
The recent agreement signed by Iraq and Iran on military cooperation should serve as a lesson to the US that regime change doesn't pay, Dr. Foad Izadi, Assistant Professor with the Faculty of World Studies at the University of Tehran, told Radio Sputnik.

Iraq and Iran have agreed to boost bilateral military cooperation in several areas, including anti-terrorism and the fight against extremism. Iranian Defense Minister Hossein Dehghan and his Iraqi counterpart Erfan al-Hiyali signed the memorandum of understanding on defense in Tehran on Sunday, Iranian news agency IRNA reported.

"Extending cooperation and exchanging experiences in fighting terrorism and extremism, border security, and educational, logistical, technical and military support are among the provisions of this memorandum," IRNA reported.

The agreement is bad news for the US, which is opposed to Iranian influence in Iraq and had been planning on expanding its own military facilities in Iraq and Syria.

Dr. Foad Izadi, Assistant Professor with the Faculty of World Studies at the University of Tehran, told Radio Sputnik that the deal is the natural consequence of an improvement in bilateral relations since the US overthrew Saddam Hussein in 2003.

"Since the fall of Saddam Hussein, Iran and Iraq have extended their relations, the two governments are working together in fighting ISIS (Daesh) and other terrorist organizations. They are cooperating at the economic level, in terms of their military cooperation. So, what you had a couple of days ago in Tehran with the visit of the Iraqi defense minister is the continuation of this friendship that exists between Iran and Iraq," Izadi said.

The two sides had been preparing the document for several months and appear to be committed to the success of the defense accord.

"The fact that there were both Sunni and Shia members of the Iraqi government in the delegation that came to Iran, shows that the divisions that occasionally cause difficulties in this part of the world are not a matter of concern. Iran is willing and able to work with all Iraqi officials no matter what religion or sect they belong to."

Moscow Backs Baghdad's Counter-Terrorism Work in Iraq
"I think they are basically following normal procedures in terms of improving the relations between the two countries. Not only are there no problems between the two, but they are finding more ways of cooperating."

In addition to the US, some regional powers such as Saudi Arabia will be disturbed by the accord, Izadi said.

"Obviously, there are some countries in this region which don't like to see good relations between Iran and Iraq, I think the Saudi government is not happy. The Saudis are fighting all their neighbors and they want to see Iran doing the same and Iran is not doing that. I think US officials are concerned about these agreements, they are interested in having a monopoly in Iraq and they want to keep the troops they have there."

The US invasion and subsequent occupation of Iraq has led to destruction and hundreds of thousands of deaths. Its continuing presence in the country is destabilizing influence on Iraq and the surrounding region, Izadi said.

"I think what Americans have proven since the invasion of Iraq in 2003 is that their presence in Iraq is not conducive to security. I think the US government's presence in Iraq causes more difficulty than it does good and I think the Americans are not interested in the wellbeing of the Iraqi people, they are generally interested in their own economic and military interests. They would like to use Iraq as a country to put pressure on Iran, so they don't like to see good relations between Iran and Iraq."

'We Don't Want Your Bases': Iraqi Vice-President Warns US Army to Back Off
"Unfortunately, US foreign policy in this part of the world has not produced any security, it has contributed to the spread of terrorism and has actually killed a lot of people."

"The best thing for the people of this region is to have a situation where the Americans are not around, because they have shown that their presence is not conducive to anything [positive]. I'm sure there are some arms companies that are happy with their sales but apart from them I don't think anyone else is happy with the Americans being in this part of the world."

The new defense agreement with Iran will help Iraq to protect its borders and prevent terrorists from entering the country, Izadi said.

"The number one priority for Iraq is to make sure the country's borders and sovereignty are respected … another priority is having a functioning government. Iraq is a wealthy country, they have a lot of oil so they should be able to prosper. But, they need to make sure the government is independent from foreign pressure, that it is representative of its citizens."

The Price of Defiance: Why US, Saudi Arabia Turning Kuwait Against Iran
After a successful military campaign in Mosul, the Iraqi army now has to finally rid the country of the last remaining pockets of terrorists. Preventing the US and Saudi Arabia from interfering in Iraqi affairs will also be "crucial" to the country's prosperity.

"This type of interference – initially supporting a dictator and later overthrowing the same dictator that they propped up using military force is a sad history of Iraq. What needs to happen is that the US government should learn from this history and not repeat it. Unfortunately, you don't see these lessons learned by the US government."