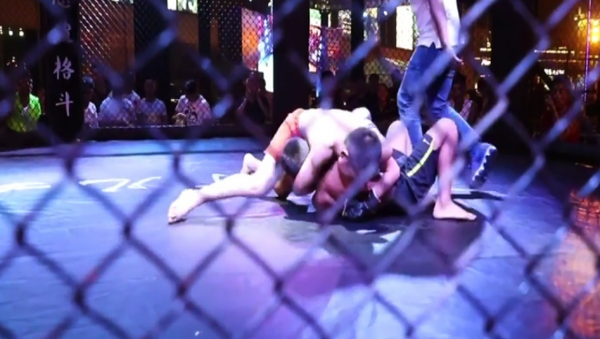 © Handout
Subscribe
International
India
Africa
Police in China are investigating what they believe to be a martial arts fight club that caters exclusively to orphans and children of the very poor.

Police in China's Sichuan province are involved in an investigation claiming that hundreds of poor and orphaned boys have been rounded up and placed in homes to train them to fight tournament-style matches, in hopes that they will become champions and enrich their trainers, the South China Morning Post reported.

After police were shown a video in which two highly trained teenage boys battled in a cage for payment while onlookers bet hundreds of thousands of yuan and bookies profited from the cut, an investigation was launched into the Enbo MMA Club.

The two fourteen year-olds were just hundreds of teens who were taken from extremely poor areas of Chengdu in Sichuan province, and who were given intensive training by the club over the last 16 years, cited by SCMP.

Enbo MMA Club supervisor Zhu Guanghui on Monday verified that police had launched an investigation, and asserted that his employer was cooperating with authorities, according to the Beijing Youth Daily.

The Chengdu city civil affairs bureau investigation noted that almost all of the children who live at the club are originally from an extremely poor prefecture of Liangshan, pointing out that the local civil affairs authorities must judge whether they should be made available for adoption, according to SCMP.

As reported by the Xiaoxiang Morning Post, clubs wishing to legally take children from the street or from their parents must meet stringent adoption criteria.

In a film documentary cited by SCMP, the club's founder, Enbo, who was born in Tibet and is a retired police officer, claimed that he founded the firm to prevent children living on the street from turning to crime.

"Some of these kids were orphans, and some had a family that was too poor to educate them," Enbo said, adding that all children under his care had been adopted by legal means authorized by the government.

Some club alumni graduate to become bodyguards or become successful in martial arts competitions, he added.

Some children cannot take the rigorous training, however, and ask to leave.

"I ask them: ‘What can you do if you return to your hometown? Herd cattle or raise pigs? Beg for food on the street, or be a delinquent?" according to SCMP.

Conditions at the club are better than on the street, asserted one child who claimed that his parents were dead and his grandmother had given him to the club three years ago.

"There is everything here — food, clothes and a place to live," the child stated. "The food here is much better than at home. There is beef and eggs here, but at home I can only eat potatoes. [If i return] I will have to take up laboring jobs."