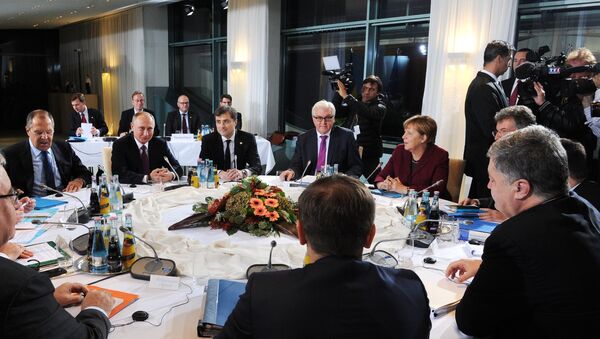 © Sputnik / Michael Klimentyev
/
Go to the photo bank
Subscribe
The leaders of Russia, Germany, France and Ukraine, the so-called Normandy Four, will hold a telephone conversation on the Ukrainian conflict settlement on Monday.

Transnistria to Seek Halt of Joint Ukrainian-Moldovan Checkpoints
MOSCOW (Sputnik) — The date of the telephone call was officially confirmed by the sides in the course of the previous week. On Saturday, the Elysee Palace issued the timetable of French President Emmanuel Macron marking the inter-state call.

In early July, Peskov said that Putin, Macron and Merkel discussed during their working breakfast on the sidelines of the G20 summit in Hamburg the stalled process of the Minsk peace agreements implementation and agreed to prepare the agenda for the next phone conversation in the Normandy format.

The latest conversation between the Normandy Four leaders took place in April and focused on prisoners’ exchange, observation of the ceasefire regime and the necessity to comply with the Minsk accords.

The 'Normandy Four' format was set up in June 2014 following the beginning of military conflict in eastern Ukraine. The format comprises Russia, Ukraine, France and Germany, which combined their efforts to resolve the conflict. In 2015, the mediators managed to broker a ceasefire agreement between the conflicting sides during negotiations in the Belarusian capital of Minsk. The so-called Minsk agreements, however, have been repeatedly violated since then, with both sides accusing each other of truce breaches.

The Normandy Quartet regularly discusses the progress made on the ceasefire and other provisions of the agreements. The latest meeting at the top level within the format was held on October 19, 2016 in the German capital of Berlin.