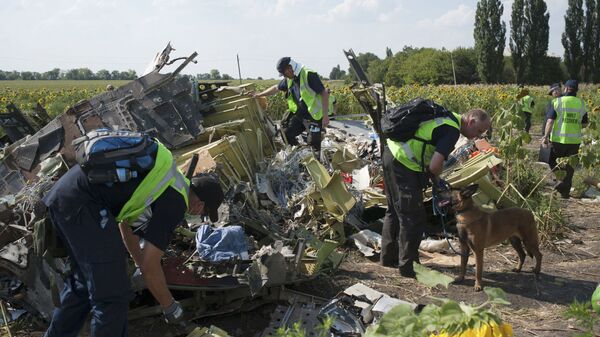 In an exclusive interview with Sputnik, German air traffic law expert Elmar Giemulla explained why he believes that Ukraine is responsible for the MH17 plane crash in 2014 and why the case may eventually be put on the back burner.

Decoding of Russia's MH17 Radar Data May Take Minutes, Dutch Accusations Biased
On July 17, 2014, Malaysian Airlines' Boeing 777 crashed in eastern Ukraine while flying to Kuala Lumpur from Amsterdam. All 298 passengers and crew aboard the aircraft died in the incident.

However, Russia's Almaz-Antey concern rejected the findings of the probe, saying that three simulations showed that the missile was launched from the Zaroshchenskoye area, which was controlled by Ukraine's army at the time of the downing. 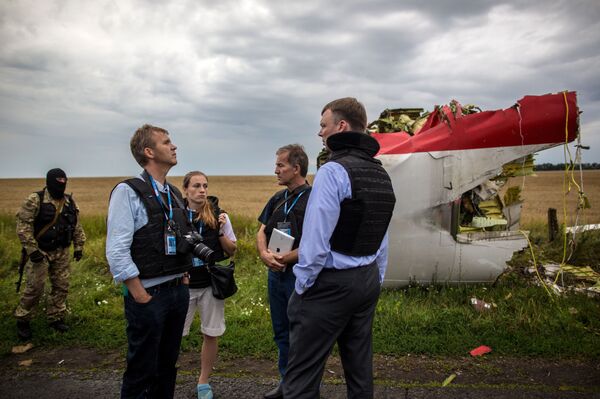 A search-and-rescue operation on the site of the MH17 plane crash in Ukraine's Donetsk region. File photo
© Sputnik / Andrei Stenin

Asked about why he had decided to file a lawsuit to the European Court of Human Rights (ECHR) without waiting for the results of the JIT investigation and a court decision due to be announced in the Netherlands, German air traffic law expert Elmar Giemulla said in an inclusive interview with Sputnik that his move was not instigated by the attribution of guilt to a particular country depending on who owned the Buk missile system and who operated it.

"I am convinced that Ukraine failed to properly fulfill its obligations to ensure the security of its airspace," he told Sputnik.

Giemulla recalled that "at the time, Ukrainian authorities were not masters of their country's eastern areas where hostilities were taking place." 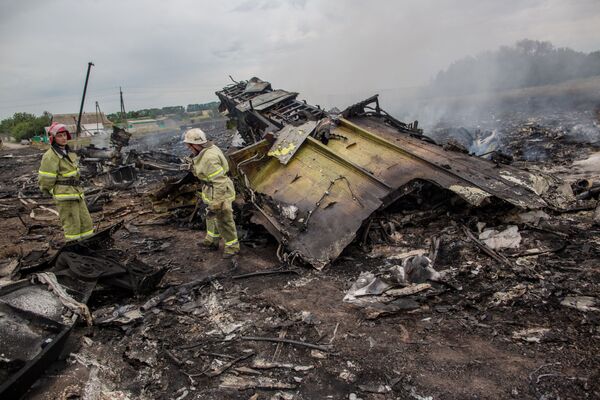 "The authorities knew that the Donbass militia possessed the weapons which were much more powerful than just man-portable air defense systems.Moreover, they knew that just a few days before this catastrophe, a Ukrainian military transport aircraft was shot down over this territory at a high altitude. However, instead of completely closing the airspace in this area, Ukraine closed it only up to the height at which civil aircraft can fly," he pointed out.

"It turns out that Ukrainian authorities simply turned a blind eye to the danger that threatened the lives of 298 people and did not prevent it, although they were able to protect these people," Giemulla added.

He said that currently he is dealing with defendants from three German families, including "a mother who lost her adult daughter, two adult children who lost their father and a young man who lost his a mother" during the MH17 plane crash.

National Monument for the 298 victims of the Malaysia Airlines Flight MH17 plane crash, during an opening ceremony on Monday.July 17 pic.twitter.com/Hj0XM8cCw3

"Like me, they all believe that Ukraine is to blame for the [MH17] catastrophe. Kiev could and should have prevented this tragedy," Giemulla said.

He also remained downbeat about the fact that a total of five countries, including Ukraine, are taking part the international investigation.

"This is a serious mistake. Ukraine itself is responsible for this catastrophe. The danger is that Kiev has the opportunity to influence the course of the investigation," Giemulla warned.

When asked what he thinks about the JIT's preliminary findings of JIT, he described them as "very premature and fragmentary", saying that key issues pertaining to the MH17 tragedy are yet to be clarified.

According to him, "no politician is interested in the truth about what had really happened being made public."

"No matter who is guilty, peace in Europe may be under threat [if we know the truth]. Therefore, most likely no one will be declared guilty," he said.

Russian Radars Could Not 'Miss' Missile Approaching MH17 Flight in Donbass
Touching upon his lawsuit to the ECHR, Giemulla expressed hope that the court will thoroughly study the document given that the ECHR did not immediately reject the lawsuit because of its inadmissibility.

Meanwhile, aviation security experts have accused Kiev of deliberately failing to close Ukrainian airspace for civil aviation flights over the zone of military operations, thereby creating a serious risk of a catastrophe.

A number of statements in this vein have been made, in particular, by representatives of the international advisory and analytical agency Flight Safety, as well as by foreign experts on aviation security.

Russian political analyst Vladimir Ardayev, for his part, wrote in his opinion piece for RIA Novosti that "focusing on the search for those who downed the plane, the investigation deviated from the study of the main question: how could it happen that the flights of civil aircraft continued over the zone of hostilities?"

"The question is how it was done and whether the measures taken by Kiev were sufficient to fully ensure the security of the airspace over Ukrainian territory," Melnichenko said.

Melnichenko cited both political and financial reasons for Ukraine's foot-dragging on the closure of its airspace. According to him, closing the sky over part of Ukrainian territory would mean Kiev's recognition of the fact that it was unable to control the situation on its own territory.

Could Ukraine Have Destroyed Evidence of Its Responsibility for MH17 Crash?
Financial reasons pertain to the fact that the use of Ukrainian airspace by foreign air carriers contributes millions of dollars to the country's state coffers, he added.

On July 7, the US Department of State said that the White House welcomed a decision by the Joint Investigation Team to grant the Netherlands the opportunity to hold trials for the case of the Malaysian Boeing MH17 crash in Ukraine in 2014.

Earlier, Amsterdam said that the trial in the case of the MH17 crash would be held in the Netherlands.