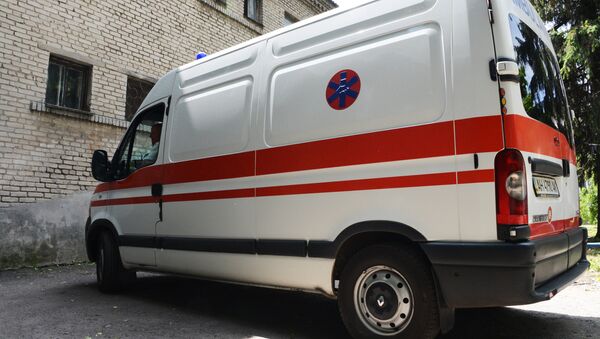 © Sputnik / Natalia Seliverstova
/
Go to the photo bank
Subscribe
The liquidation of Ukraine's State Sanitary and Epidemiological Service has seriously affected Ukrainians' health, with cases of food poisoning and botulism seeing a sharp rise. Speaking to Sputnik, Ukrainian politics expert Roman Manekin warned that a bad situation threatens to turn into a catastrophe.

Ukrainians' health has been seriously compromised by the liquidation of the State Sanitary and Epidemiological Service, Ukraine-focused observers have reported, citing a dramatic rise in the number of incidents involving mass poisonings, including botulism.

Ukraine's government formally liquidated the agency earlier this year, transferring its functions to the State Service for Food Safety and Consumer Protection.

'Marshall Plan' for Ukraine: Illusions of Economic Recovery
Last month, nearly 250 children were poisoned at a health resort in the southern Ukrainian region of Zaporizhia. 13 were hospitalized, suffering from an unknown infection, later revealed to be caused by poor quality food. A similar incident took place in early June, with 19 children at a camp in Odessa region hospitalized after contracting viral Hepatitis A.

Medical experts say the outbreaks are almost always brought on by a violation of food production safety standards – i.e. when food is produced in unsanitary conditions and without proper control from the relevant sanitary services.

Infectious disease specialist Olga Golubovskaya said recently that it was particularly concerning that new cases of poisonings were being reported not just from food sold by street vendors, but from industrially-produced canned fish products sold in supermarkets across the country.

The situation in the public catering sector is similarly worrying, according to experts. Earlier this year, over three dozen customers at two Kiev-based sushi restaurants were diagnosed with symptoms of acute intestinal infection. City officials blamed the mass poisonings on sick employees. Authorities began a campaign to monitor city restaurants, identifying a slew of violations of sanitary and epidemiological norms at 79 establishments, including non-compliance with standards for storage, transport, preparation and sale of food.

'EU Understands It Took Wrong Side' in Donbass Conflict
The situation is similarly worrying with the sale of alcohol. Nearly 100 cases of lethal poisoning caused by low-quality vodka and alcohol-containing chemicals have been reported since the beginning of the year.

The initiative to liquidate the State Sanitary and Epidemiological Service was begun in May 2014, as part of a broader reform of the Ukrainian health care system. The reforms were initiated by Georgian-born Health Minister Alexander Kvitashvili, whose earlier work as Georgian health minister was condemned by local politicians for having amounted to "the factual destruction of the health care system."

Experts say the mass outbreak of illness brought on by food poisoning demonstrates that the weakened State Sanitary and Epidemiological Service is unable to cope with its responsibilities in its current state. According to Olga Golubovskaya, the need for full-fledged sanitary control over food production is particularly crucial in the current crisis situation facing the country.

"I will remind you that there are no botulism antitoxin serums available in the regions…We have only one thing available to us: prevention," she stressed.

According to the Ministry of health, Ukraine's reserve of anti-botulism serum, delivered under a UN-sponsored assistance program, is enough for only 22 people.

Ukraine Crisis May End With 5 Mln Ukrainians Applying for Russian Citizenship
Unfortunately, experts say that Ukrainian-American health minister Ulana Suprun, who replaced Kvitashvili in April 2016, is too busy lobbying for the closure of hospitals and clinics to pay attention to the looming crisis.

Last week, new figures from the World Health Organization and UNICEF found that Ukraine was among the bottom ten countries in the world with the lowest rates of childhood vaccination, alongside poverty and conflict-stricken countries including the Central African Republic, Syria and South Sudan.

Earlier this month, Ukraine's parliament approved a new bill on medical reforms. The document, which now needs to pass the second reading, envisions the introduction of government payment for hospitals and doctors on a by-patient basis, rather than based on the number of beds. Suprun said she hoped the new health care reform bill would be adopted in the autumn.

"The priority for Ukrainian officials is endless reform," the observer said. "Beginning in 1991, Ukraine has seen 21 draft laws on health insurance, and over 20 health ministers have come and gone. This is despite the fact that health care is perhaps the most corrupt of all spheres, with the possible exception of the police."

"The situation with Ukraine's public healthcare system is actually catastrophic; it really does require reform. But the draft reform project being proposed today raises very serious doubts and is a source of social tension in Ukraine," Manekin added.

Ukraine 'Chokes' on Corruption - Putin
According to the observer, the situation is likely to get worse before it gets better.

"One of the provisions of this bill is that the Ministry of Health takes over the responsibility for purchasing medicines abroad –in Western Europe; a fairly serious sum has already been allocated [for this purpose]. This creates a kind of 'feeding trough' for unscrupulous people in this area. And, in my opinion, the situation surrounding health care will get worse. Although seeing it deteriorate further is something that's hard to imagine."