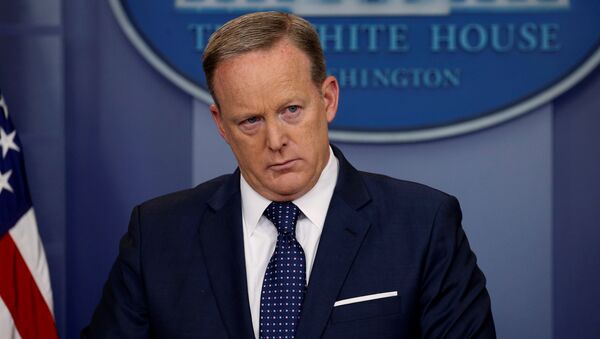 © REUTERS / Jonathan Ernst/File Photo
Subscribe
The resignation of White House press secretary Sean Spicer and the rise of Anthony Scaramucci is distracting the US public from the crises facing Washington in the Middle East and possible increased surveillance at home, analysts told Sputnik.

WASHINGTON (Sputnik) – Spicer reportedly handed his resignation letter to President Donald Trump because of his disagreement with the administration's decision to appoint Scaramucci as the new White House communications director. Spicer will continue serving as the White House press secretary through August.

Spicer’s Departure Likely to Help Trump Present Message
However, Sam Husseini, an independent writer based in Washington and the founder of VotePact.org said the drama, which dominated the news cycle in the US media on Friday served just to further distract the American public from the collapse of US efforts to try and topple the government of Syria.

"Trump provides the establishment with drama after drama: This functions as a massive distraction from actual policy questions," he said. "Syria is likely being carved up with possibly horrific consequences."

VotePact.org works to provide voters with a path out of the duopoly

Trump’s decision to end financing rebel groups in Syria seeking to overthrow the legitimate government of President Bashar Assad now carried the risk of "blowback" as some of those groups could use their US-supplied weapons and training to attack Americans in retaliation, Husseini warned.

"What will CIA funded rebels do now? Possibly what Mujahideen [in Afghanistan] did decades ago: turn on the US," he suggested.

The controversy over the White House press and communications staff also served to distract the US public as well as policymakers from the growing tensions in Jerusalem, where Israeli security forces had cracked down on Muslim activities at the sacred al-Aqsa mosque, Husseini warned.

Also, in their obsession with Trump’s media team reshuffle, both the US media and politicians in Congress were failing to scrutinize the past record of Christopher Wray’s, Trump selection as the next director of the federal Bureau of Investigation (FBI), Husseini pointed out.

"The FBI nominee, Christopher Wray, is sailing through though he seems on board with all manner of unconstitutional conduct, since all the Democrats in Congress seem really concerned about is alleged Trump wrongdoing with regard to Russia," Husseini said.

The failure to adequately scrutinize Wray, and the failure of US policies across the Middle East gave Trump a much greater window of opportunity to win approval for even more dangerous and rash policies after any a possible future provocation, Husseini feared.

"This drama could all be noise untill the next 9/11 happens so that the US establishment can get its mojo back and kill on a level befitting its ambitions," he said.

Some critics have praised Scaramucci for his first interaction with the media on Friday after his appointment as White House c director of communications.

However, Sue Udry, executive director of Defending Rights and Dissent, a national civil liberties organization cautioned that Scaramucci had enjoyed an easy challenge because Spicer had bungled media outreach and relations with the press so badly during Trump’s first six months on office.

The White House press office "has been a disgrace thus far," she told Sputnik.

Trump's choice of Scaramucci was reportedly backed by his son-in-low and adviser Jared Kushner, daughter Ivanka and Wilbur Ross, the Commerce Secretary.

Scaramucci, 53 is an American entrepreneur, financier, political figure, and author. In June 2017 he became a senior vice president and chief strategy officer at the US Export-Import Bank. Following the 2016 election, he served on Trump’s Presidential Transition Team Executive Committee.

From 1989 to 1996 Scaramucci held senior positions at the Goldman Sachs investment firm on Wall Street. In 2005, he founded the global investment firm SkyBridge Capital and sold the company in early 2017 to take a role in the Trump administration.