Hints About What Russia Can Expect From Trump's New Communications Director 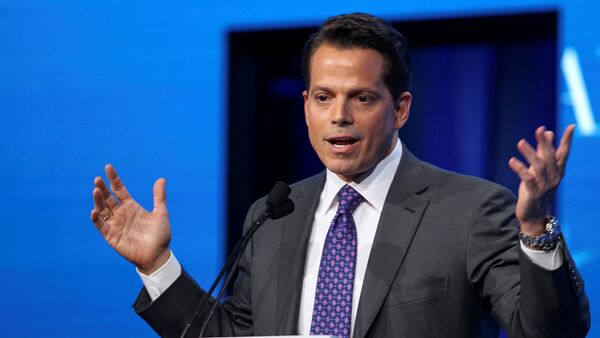 Scaramucci's appointment to the post, which includes responsibility for developing and promoting the president's agenda and leading the administration's media strategy, coincided with the departure of White House press secretary Sean Spicer, who admitted that his decision was linked to Scaramucci's promotion. Spicer's post will be filled by former deputy White House press secretary Sarah Huckabee Sanders.

Trump "Attacks" 'Fake News' CNN in Twitter Post, Sparks Social Media Storm
Scaramucci, a hedge fund banker who became a member of Trump's finance committee during the election and a member of the transition team following his victory in the election, was caught up in a fake news scandal last month, after CNN was caught disseminating false information about a non-existent Senate Intelligence Committee inquiry into his ties with a Russian sovereign wealth fund. The broadcaster would later retract its claims, while three reporters who worked on the story resigned. CNN apologized to the businessman.

According to Russian business magazine Expert, if Scaramucci's public remarks are anything at all to go by, his appointment as Trump's communications secretary may just be a good thing for Moscow.

In January 2017, on the sidelines of the World Economic Forum in Davos, Switzerland, the financier told Russian media about the expediency of lifting US sanctions against Moscow, and the opportunities for normalizing relations between the two countries under Trump in general.

Scaramucci said that he believed Washington's sanctions policy was ineffective, and had an opposite effect to that which was intended.

"You know the Russian people better than me," he told his interviewer. "I think the sanctions had in some ways an opposite effect because of Russian culture. I think the Russians would eat snow if they had to. And so for me the sanctions probably galvanized the nations with the nation's president."

Russians Should Not Get Diplomatic Compounds Back for Nothing - Ex-Intel Chiefs
The businessman-turned-political advisor also said it was necessary to "think outside the box," both on Russia and other issues.

"We have to make the world safer, we have to eliminate from the world the threat of radical Islamist terrorism, and we have to figure out the ways to grow the wages for working-class families. Whether in Russia or in the US, I think there's a lot of common objectives," he said.

Suggesting there were some decisions made by Russia which were "met with some level of disapproval by the global community," Scaramucci nonetheless stressed in his January interview that it would be good to have the opportunity "to sit down again" and negotiate on some issues.

As for Trump, Scaramucci said that the president had "enormous respect for the Russian people and the legacy" of Russian-US relationship, and accordingly, said that "his belief is there's probably shared values or shared interests, that we can align ourselves with each other and this could be mutually beneficial."

Still, as with Trump, Scaramucci's tweets tell a bit of a different story, if one goes back far enough. In the run-up to the 2016 election, the businessman initially favored traditional anti-Russian Republican Jeb Bush. Four years earlier, ahead of the 2012 race, he backed Republican Mitt Romney, even going so far as to support the former governor of Massachusetts against Donald Trump's criticism. Also in 2012, he accused Russia of supporting terrorism, and agreed with Romney's claim at the time that Russia was Washington's 'No. 1 geopolitical foe'.

In other words, if the new White House Communications director's public remarks are based on calculation of political expediency, he may very well be a good fit for the job of coordinating the president's media strategy. As far as Russia is concerned, only time will tell what, if anything, Scaramucci's appointment will bring to the table.