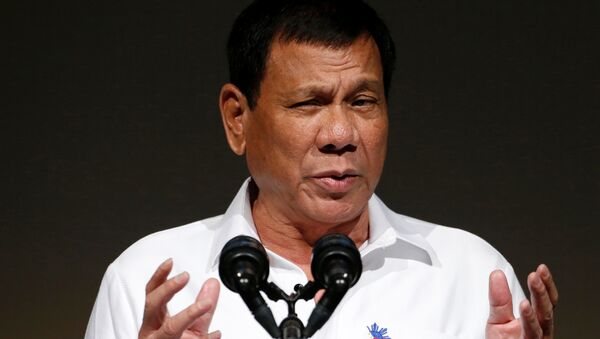 © REUTERS / Kim Kyung-Hoon
Subscribe
International
India
Africa
Despite receiving an invitation from US President Donald Trump, Philippines President Rodrigo Duterte on Friday said he would never visit "lousy" America. His comments were made in frustration at his deadly war on drugs being criticized during a US Congress human rights commission hearing.

"There will never be a time during my term when I will be going to America, or thereafter," Duterte said. "I've seen America and it's lousy. They have many human rights violations."

He also criticized the US for its military presence in the Middle East, Channel News Asia reports.

Duterte is accused by Amnesty International and other organizations of allowing the extrajudicial killing of thousands under the guise of ending drug trafficking in the Philippines.

Barack Obama was the first US president to criticize Duterte’s drug war, saying during the 2016 Association of Southeast Asian Nations (ASEAN) conference that if Washington is going to aid Manila in the fight to stop narco-traffickers, the Philippines would have to go about it the "right way … Because the consequences when you do it the wrong way: innocent people get hurt. And you have a whole bunch of unintended consequences that don't solve the problem."

Duterte responded by calling Obama a "son of a whore" and a month later declared the Philippines economically and military "separated" from Washington.

His relationship with the current US president has been quite different. US President Donald Trump praised Duterte’s drug war during an April phone call with the Philippines’ leader, but due to other overseas trips Duterte wasn’t able to accept an invitation to the White House he extended.

US Congressman James McGovern said during a Thursday hearing centered on human rights violations in Manila’s drug war that Duterte should not have been invited and threatened to lead protests against him if he did show up on US soil.

"President Duterte, by all accounts, seems to not have a high regard for human rights," McGovern said, according to Rappler. "And I certainly believe, very strongly, that a man with the human rights record of President Duterte should not be invited to the White House. And if he comes, I will lead the protest because, again, we ought to be on the side of advocating for human rights, not explaining them away."

"What makes that guy think I will go to America?" was Duterte’s retort.

Duterte was inaugurated as president in June 2016.