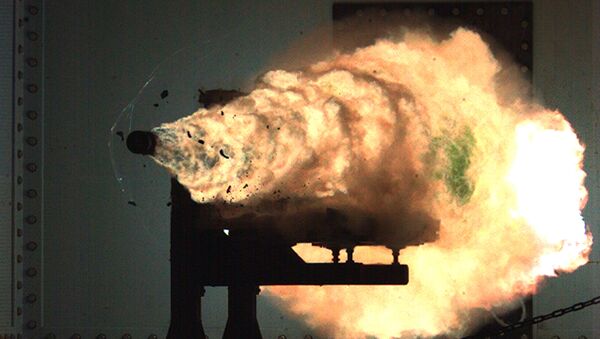 CC0 / /
Subscribe
International
India
Africa
A pet weapons project of the US Navy is set to receive significant upgrades this summer.

The electromagnetically-powered railgun, a futuristic weapon firing projectiles so fast that explosives are considered redundant, will be the recipient of upgrades to its power components as well as to its firing rate, according to Defense Tech.

Early testing of shipboard railgun prototypes began in 2006, and the US Navy had hoped to have a railgun installed on their beleaguered DDG-1000 Zumwalt-class destroyers by now, but no clear schedule has yet been established.

Railgun projectiles, without the conventional explosive payload, are seen as safer and less expensive to operate than traditional weapons, as the device uses an electromagnetic pulse to launch projectiles at extremely high velocities.

The Navy's Office of Naval Research (ONR) is still in the developmental stages of the weapon's real world use, however.

Over the summer months, technicians will focus on increasing the power delivered to the railgun, which has the net effect of increasing the weapon's fire rate, hopefully up to one shot every six seconds, or 10 in one minute.

At a news conference on Thursday in Washington, DC, Dr. Tom Beutner, the head of Naval Air Warfare and Weapons for ONR, asserted that the higher power delivery rate will also increase the railgun's range to about 125 miles,

Commenting on the projected power and fire rate increases for the railgun, Beutner said, "We expect that both… milestones will be achieved over the next year," cited by Defense Tech.

While the railgun is viewed with optimism by many in the force, significant challenges remain, including wear and tear and the delivery of enough power to make the gun effective in a real-world setting.

"They've extended the launcher core life from tens of shots' core life when program started to something that's now been fired over 400 times and… we anticipate barrels will be able to do over 1,000 shots," the ONR weapons chief claimed.

"Power generation and storage approaches are all part of what we're researching as well," he added.