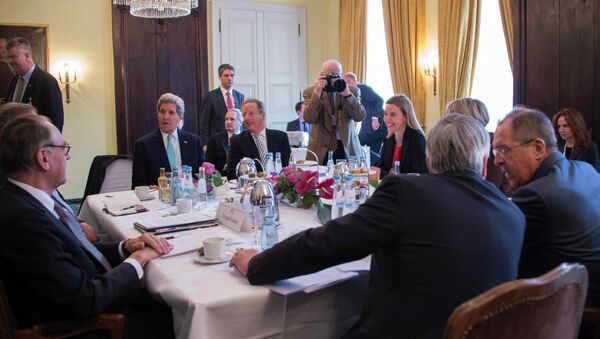 © AP Photo / Jim Watson, Pool
Subscribe
The Middle East Quartet, comprising Russia, the United States, the European Union and the United Nations, expressed its concern regarding the escalation in Jerusalem, a statement of the Quarter said.

RT Correspondent Hit By Israeli Soldier During Broadcast of Clashes in Jerusalem
WASHINGTON (Sputnik) — "The envoys of the Middle East Quartet from the Russian Federation, the United States, the European Union and the United Nations are deeply concerned by the escalating tensions and violent clashes taking place in and around the Old City of Jerusalem. They strongly condemn acts of terror, express their regret for all loss of innocent life caused by the violence, and hope for a speedy recovery to the wounded," the statement, released late on Saturday, said.

On Friday, three Israeli nationals were killed in a stabbing attack at a home in the Jewish settlement of Neve Tsuf. The same day, three Palestinians were killed and hundreds were injured in Jerusalem and across the West Bank in clashes with police during protests against Israel’s decision to install metal detectors at the gates to the Temple Mount, where the Al-Aqsa mosque, the third holiest site in Islam is located. According to media reports, at some check points in the Old City of Jerusalem the Israeli police were restricting the entrance to the Mount Temple for men under 50 years old.

"Noting the particular sensitivities surrounding the holy sites in Jerusalem, and the need to ensure security, the Quartet envoys call on all to demonstrate maximum restraint, refrain from provocative actions and work towards de-escalating the situation," the statement of the Quartet added, stressing that violence "deepens mistrust and is fundamentally incompatible with achieving a peaceful resolution of the Israeli-Palestinian conflict."

Palestinian leader Mahmoud Abbas on Friday announced a freeze of all contacts with Israel over violence in Jerusalem. Some regional states, including Turkey and Jordan, have condemned the measures of the Israeli authorities and called on Tel Aviv to resume the access for Muslims to Al-Aqsa mosque.