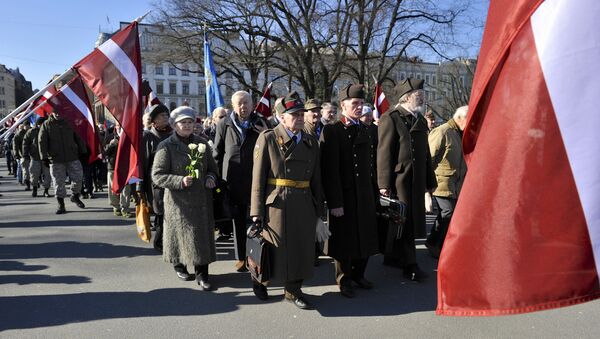 A group of lawmakers in the European Parliament has proposed slapping sanctions on Estonia, Lithuania and Latvia over the growth of fascist sentiments there. Russian political observers believe the initiative is unlikely to go very far, since Brussels and NATO have a habit of using far right attitudes for their own political and military purposes.

Lawmakers from the European Parliament's European United Left – Nordic Green Left parliamentary faction are preparing a resolution that would introduce economic sanctions against Baltic governments over their alleged failure to stem the rise of far-right and fascist sentiments in their countries.

Lawmakers explained that they decided to act after seeing a worrying rise in the number of rallies and marches in the Baltic countries organized by far-right groups with permission from local authorities. Estonia and Latvia in particular have been holding annual parades dedicated to Waffen-SS volunteer unit veterans since the collapse of the Soviet Union.

'Russia and Europe Must Stand Together Against the Resurgence of Nazism'
Lawmakers are demanding that Brussels unequivocally "condemn events which promote Nazi ideology." The relevant resolution will be submitted to the European Parliament in the fall.

"The introduction of sanctions against the Baltic countries by the European Commission is an appropriate step," European United Left Nordic Green Left faction member Jiri Mastalka said. "They may, for example, be deprived of money from European funds."

Brussels, according to the Czech politician, "is currently turning a blind eye to the growth of fascist sentiments in Europe, not only in the Baltic countries, but in Ukraine as well." 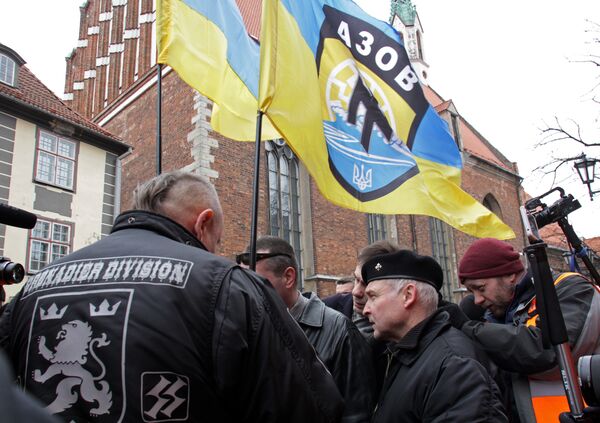 Mastalka noted that for the resolution to be adopted, it will require the support of lawmakers from other groups. But even if it doesn't receive the approval of other MEPs, it will be a "notable political gesture," he said.

EU Resolution Against Fascism Leniency Should Include Ukraine - Russian MP
Russian lawmakers welcomed the initiative. State Duma International Affairs Committee chairman Leonid Slutsky told Sputnik that if Brussels adopted the resolution, it would assist in the restoration of historical justice. Furthermore, he added that "it is quite logical to include Ukraine, where today's 'fighters for independence' openly use Nazi German symbols, in its provisions."

Asked to comment on the leftist lawmakers' initiative, political scientist Pavel Svyatenkov suggested that unfortunately, it is unlikely that it will find the support of a majority in the EU's parliamentary body.

"There are about 700 MEPs in the European Parliament, and naturally, there are going to be people who are upset by the situation in the Baltic states," the observer said. "However, this does not mean that the resolution will be adopted, and become a document on which the EU orients itself," he added.

"As practice shows, [Brussels] is entirely capable of closing their eyes on whatever they want to, including the manifestations of Nazism in some states. For example, the rights of [ethnic] Russians in Latvia have been violated for several decades now, but this does not bother anyone in the EU, and neither the EU, nor the West bother to reprimand Latvia's leadership."

"Therefore, unfortunately, on this issue I am not an optimist," Svyatenkov said. "It is unlikely that the European Parliament will adopt such a resolution. Even if they did, it is unlikely to become a part of European politics. Brussels puts pressure on countries only when it is beneficial to major European powers and the EU leadership. Ideological questions are of little interest to them," the analyst concluded.

Pointing to the recent NATO propaganda video recalling the history of the 'Forest Brothers', the ex-Nazi collaborator militants who engaged in a guerrilla campaign in the Baltics against the Soviet Army after World War II, Bychkov wrote that far from condemning far right nationalism, Western powers seem intent on using it for their own political and military purposes. 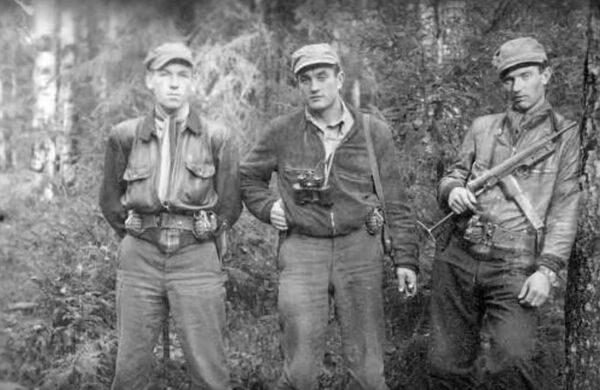 "As far as the Forest Brothers are concerned – these are not some kind trolls living in oak groves…These are anti-Soviet armed groups which operated on Estonian, Latvian and Lithuanian territory during the 1940s and 1950s. During the Great Patriotic War, many of them fought in the ranks of fascist punitive SS battalions. Over 25,000 people died at the hands of the Forest Brothers, many of them locals. And now out of these forest hit squads NATO has created a whole laudatory saga."

"Jiri Mastalka is probably right to doubt that the resolution will pass," Bychkov noted. "The European Parliament, which is sufficiently anti-Russian in its character, is full of those who would like to forget the Nuremberg Trials* as quickly as possible."

*The Nuremberg Trials were a series of military tribunals set up and held by the Allied forces shortly after the conclusion of the Second World War against Nazi leaders who committed war crimes during the war.