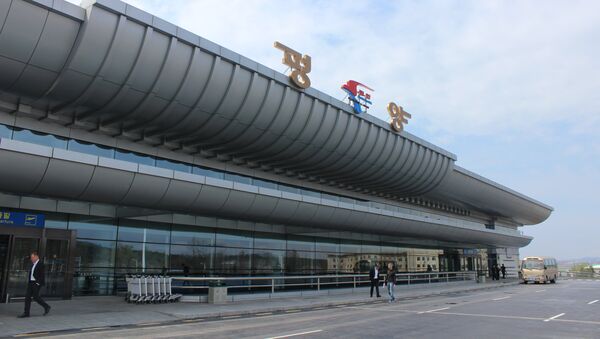 © Sputnik / Andrey Olfert
Subscribe
The United States will prohibit its citizens from traveling to the North Korea after the death of US citizen following his detention in the country, an agency arranging tour programs to North Korea said Friday.

North Korea Detains One More US Citizen Suspected of 'Hostile Acts'
MOSCOW (Sputnik) — At least 17 US citizens have been detained in North Korea over the past 10 years, despite a State Department warning against travel to the country. Three US citizens of Korean descent are reportedly being imprisoned in North Korea. Kim Hak-song was detained this May on accusations of hostile acts against the state, Kim Dong-chul was sentenced in 2016 for spying, while Kim Sang-duk was seized last April for unknown reasons.

"We have just been informed that the US government will no longer be allowing US citizens to travel to the DPRK (North Korea). It is expected that the ban will come into force within 30 days of July 27th. After the 30 day grace period any US national that travels to North Korea will have their passport invalidated by their government," the Young Pioneer Tours (YPT) agency said on its website.

The YPT is the agency hat brought US college student Otto Warmbier to North Korea in 2016, who was sentenced to 15 years of hard labor for trying to steal a propaganda sign from a hotel in Pyongyang.