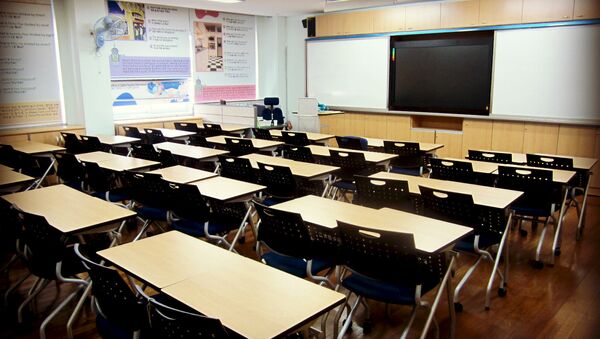 Remember when your parents told horror stories about how teachers used to hit them? Well, officials at the Three Rivers Independent School Board in Texas are bringing corporal punishment back in the form of *drum roll* paddling.

‘Angel of Death’ Texas Nurse May Have Killed 60 Infants
Corporal punishment by definition is a "deliberate infliction of physical pain by hitting, paddling, spanking, slapping or any other physical force used as a means of discipline," according to the Texas Classroom Teachers Association.

The policy, approved by district board members Tuesday, allows parents to opt in or out by providing both written and verbal consent, according to the Caller-Times. For unfortunate students whose parents are in favor, they "will receive one paddling for his or her infraction when they misbehave at school."

But not just any old teacher can deliver the punishment – policy states only a campus behavior coordinator or principal can administer the measure.

"If the parent is not comfortable with it, that’s the end of the discussion," Mary Springs, the school district’s superintendent, told the Caller-Times.

Boys Wear Skirts to School in Protest at Ban on Shorts During UK Heatwave
Andrew Amaro, the Three Rivers Elementary School’s campus behavior coordinator, proposed the idea hoping it would have a more immediate effect on students than in-school suspension or detention, USA Today reported.

"I believe it worked," Amaro said. "It was an immediate response for me. I knew that if I got in trouble with a teacher and I was disrespectful, whatever the infraction was, I knew I was going to get a swat by the principal."

In the state of Texas, corporal punishment is generally legal, but administrators can only use the method if it’s approved by a school board of trustees and the students’ parents.

Expected to begin at the start of the 2017-2018 school year, students will only have a few months to get their acts in order.

The paddle, likely to be made from wood, was approved by a vote of 6 to 0. Only one member of the board chose to abstain.