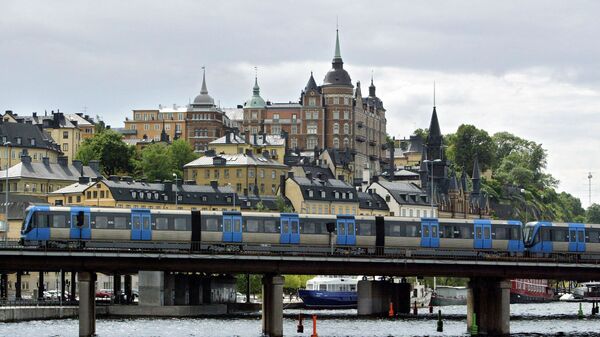 © AFP 2023 / SVEN NACKSTRAND
Subscribe
International
India
Africa
After Britain's refusal to name a polar research ship Boaty McBoatface despite the popular vote, Swedes picked up the initiative and named one of its trains Trainy McTrainface as a tribute. The name was chosen in a public vote in an attempt to comfort the people who still mourn the vessel, which in the long run was named after a famous naturalist.

Science & Tech
Wet Dreams: Norway Fantasizes About Overseas Hyperloop to Denmark
Trainy McTrainface won 49 percent of the votes in the naming competition concluded online by Swedish train operator MTR Express and the Swedish daily Metro, beating alternatives such as Miriam, Poseidon and Håkan, Metro reported. The train will commute between the Swedish capital Stockholm and the country's second-largest city, Gothenburg.

"This is news that will be received with joy by many, not just in Sweden," MTR Express wrote in a statement.

The train is the third one of the four that Metro readers can vote to name. The first two were named Glenn and Estelle. The first one is an apparent accolade to the IFK Gothenburg soccer squad of the 1980s that featured four players with that name, which is otherwise highly uncommon in Sweden. Estelle is a tribute to Princess Estelle of Sweden, who is the elder child of Crown Princess Victoria and Prince Daniel. The vote for the fourth and last train name begins next week.

Last year, the public bid #NameOurShip attracted a large crowd of users, who surprisingly chose Boaty McBoatface over other alternatives. As the poll was non-binding, the choice was made to name the $326 million polar research ship after veteran BBC naturalist Sir David Attenborough. As a consolation, though, it was decided to use the name Boaty McBoatface for one of the craft's underwater vehicles.

How did I miss this? Boaty Mc Boatface wins! Happy days https://t.co/OYPfzVvlot

​Shortly afterwards, a petition emerged calling for Sir David Attenborough to change his name to Sir Boaty McBoatface "in the interest of democracy and humor," receiving thousands of signatures.

Incidentally, the instigator of the Boaty name later apologized for his suggestion, which won more than 124,000 votes.

'Hot' Swedish Bus Driver Puts on Skirt to Protest Uniform Regulations
Even though it did not really turn out as planned, Boaty McBoatface spawned a lot of followers. In May 2016, Google released a natural language parser named Parsey McParseface.

In September 2016, the US rejected Stealthy McStealthface as the proposed name for its new stealth bomber B-21, which was ultimately named "Raider."

In May 2017, the Hunstanton Sea Life Sanctuary in the UK declared that the first Humboldt penguin chick to hatch in more than a decade had been named Fluffy McFluffyface.