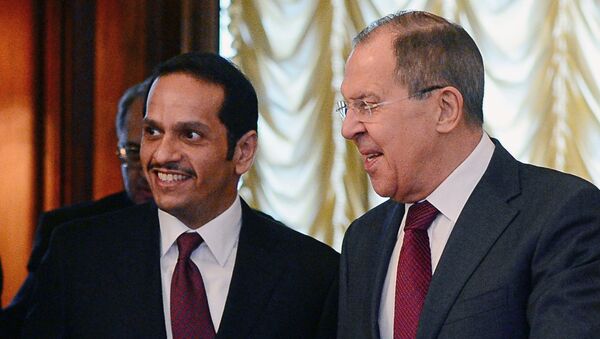 Modified Demands to Qatar Key to Diplomatic Row Talks - Saudi UN Representative
BEIJING (Sputnik) — In a statement carried by the Foreign Ministry of China where he is on a working visit, the Qatari top diplomat urged Saudi Arabia, Bahrain, the United Arab Emirates and Egypt to make an effort to bridge the gap after the four nations imposed sanctions on Doha over its alleged support of terrorists, an accusation it denies.

"Qatar is ready to start constructive talks with all parties if they respect sovereignty and refrain from interfering in the country’s internal affairs and stick to international laws in order to rebuild mutual trust and make a serious step toward resolving the existing dispute," Al-Thani said during his meeting with the Chinese counterpart in Beijing.

Chinese Foreign Minister Wang Yi called the Arab states to urgent direct talks to stop the crisis from escalating and urged all sides of the standoff to exercise restraint. He also remarked on an "important role" that the Gulf Cooperation Council played in previous efforts to resolve regional rows.

The four allies cut diplomatic relations with Qatar last month and issued it with an ultimatum. Qatar rejected their list of 13 demands, which included closing the Al Jazeera news channel and scaling down ties with Iran, saying they were unrealistic and violated its sovereignty.