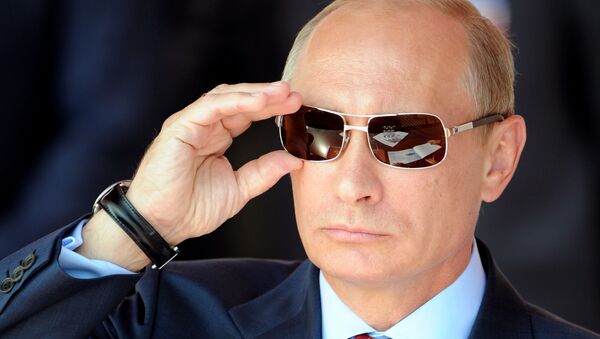 Russia
Putin Says Work in KGB Was Tied to Non-Official Cover Espionage
The Russian president said that his code name during the KGB academy education was "Platov," adding that he sees no reason to use code names now.

"As you know, I began my work from foreign intelligence service. Then I sometimes used technological pseudonyms. But now it's just ridiculous for me to use a pseudonym. Of course, I would not take any nickname [in social media]… By the way, it would be normal for everyone [not to use nicknames in social media]. Why hide behind a pseudonym?" Putin said speaking to children of the Sirius children’s center in Sochi on use of nicknames on social media accounts.

"When I studied in the intelligence school, I had a pseudonym 'Platov.' Everyone had pseudonyms, because the work presupposes a certain level of conspiracy," Putin said.

Putin added he does not have any accounts on social media networks.

Putin said he knows that there are some 5,000 social media accounts using his name. "I have nothing to do with any of them, just so it is clear to you and other users. It is not me writing under my name. I hope they say nothing bad, but either way it is not me," Putin said.

Russia
Putin Congratulates His Former KGB Boss During Work in Dresden on Anniversary
"It seems to me, if a person does something worthy, interesting, something that he can be proud of,… why hide behind a pseudonym?" Putin concluded.

In 1985-1990, the Russian president worked for the KGB in the Eastern German city of Dresden. According to him, he was doing foreign intelligence work.

In 2013, Putin provided a rare insight into 16 years of his work in the KGB. "It’s bad to eavesdrop," Putin smiled and told a meeting of the All-Russian People’s Front movement. "I learned this from my time in the KGB. [And] I gave it up."