N. Korea Policy Recommendations Made by Russia, China Only Way to Avoid Disaster 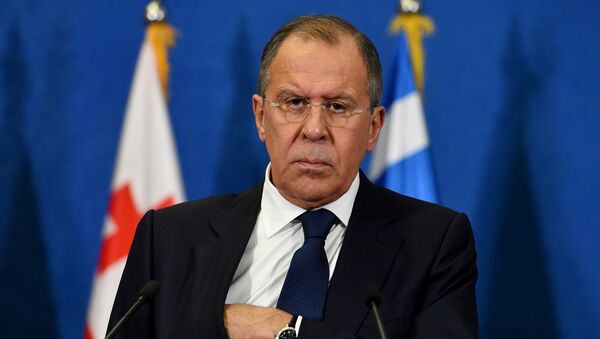 © AFP 2021 / ANDREJ ISAKOVIC
Subscribe
Policy recommendations proposed by Russia and China to ease tensions on the Korean Peninsula, will certainly take time to implement but seem to be the only way to avoid disastrous consequences that may occur, according to Russian Foreign Minister Sergey Lavrov.

Come One, Come All: North Korea Aims to Become Tourist Magnet
MOSCOW (Sputnik) — Policy recommendations proposed by Russia and China to ease tensions on the Korean Peninsula, including mutual concessions on the side of North Korea, South Korea and the United States, will certainly take time to implement but seem to be the only way to avoid disastrous consequences that may occur, Russian Foreign Minister Sergey Lavrov said on Friday.

"Therefore, parallel with continued pressure on North Korea, not instead but parallel with the continued pressure on North Korea, Russia and China proposed a parallel political track… North Korea suspends all launches and all tests and in response the US and South Korea do not cancel but reduce the scale of their war games in that region which we believe could help to defuse the situation and allow for some professional discussions to build up confidence starting by very simple things, you know, adopting a statement that no one is going to attack each other. The security of each of the participants of this process would be mutually guaranteed," Lavrov told the NBC network.

The Russian foreign minister stressed that it would take time to implement this strategy but it is "the only way to save us from a disaster which is looming."

On Thursday, Russian Deputy Foreign Minister Igor Morgulov and Chinese Assistant Minister of Foreign Affairs Kong Xuanyou discussed possible ways to reduce tensions on the Korean peninsula and agreed to continue coordination at all levels and work on improving the situation.

The tensions in the region have recently intensified due to Pyongyang's multiple nuclear tests and launches of ballistic missiles, conducted in violation of the UN Security Council’s resolutions. On July 4, North Korea announced it had successfully launched its first intercontinental ballistic missile, saying it traveled 580 miles and reached an altitude of 1,740 miles during its 39-minute flight before accurately hitting a targeted area in the Sea of Japan. The test was sharply criticized by the international community.

000000
Popular comments
the us are jokers in arming taiwan to face china , and yet expect china to help reign in north korea.

carlos deblanco
21 July 2017, 22:32 GMT1
000000
Did Mr. Lavrov suggest a specific timetable or simply acknowledge that this process "would take time"? How many more KN nuclear tests and missile launches are acceptable and what is the equivalent in US/KS Foal Eagle exercises? At what point does China get serious about reducing its trade with KN and what it will take to restore it? Vague suggestions can be worse than none when they don't specifically address that "what if" factor.
jkel
22 July 2017, 21:23 GMT1
000000
Newsfeed
0
New firstOld first
loader
LIVE
Заголовок открываемого материала
Access to the chat has been blocked for violating the rules . You will be able to participate again through:∞. If you do not agree with the blocking, please use the feedback form
The discussion is closed. You can participate in the discussion within 24 hours after the publication of the article.
To participate in the discussion
log in or register
loader
Chats
Заголовок открываемого материала
Worldwide
InternationalEnglishEnglishMundoEspañolSpanish
Europe
DeutschlandDeutschGermanFranceFrançaisFrenchΕλλάδαΕλληνικάGreekItaliaItalianoItalianČeská republikaČeštinaCzechPolskaPolskiPolishСрбиjаСрпскиSerbianLatvijaLatviešuLatvianLietuvaLietuviųLithuanianMoldovaMoldoveneascăMoldavianБеларусьБеларускiBelarusian
Transcaucasia
ԱրմենիաՀայերենArmenianАҧсныАҧсышәалаAbkhazХуссар ИрыстонИронауОssetianსაქართველოქართულიGeorgianAzərbaycanАzərbaycancaAzerbaijani
Middle East
Sputnik عربيArabicArabicTürkiyeTürkçeTurkishSputnik ایرانPersianPersianSputnik افغانستانDariDari
Central Asia
ҚазақстанҚазақ тіліKazakhКыргызстанКыргызчаKyrgyzOʻzbekistonЎзбекчаUzbekТоҷикистонТоҷикӣTajik
East & Southeast Asia
Việt NamTiếng ViệtVietnamese日本日本語Japanese俄罗斯卫星通讯社中文（简体）Chinese (simplified)俄罗斯卫星通讯社中文（繁体）Chinese (traditional)
South America
BrasilPortuguêsPortuguese
NewsfeedBreaking
01:39 GMTThe Last Time the US Gave an Ally Nuclear Technology, France Tried to Quit NATO
01:36 GMTAntarctic Ozone Hole Now 'Larger Than Usual', Covering Entire Continent, Scientists Say
01:22 GMTTrump Jokes Jared Kushner ‘More Loyal to Israel Than US’
01:15 GMTVogue Releases Video of AOC’s ‘Dress Prep’ for Met Gala
00:25 GMTNo New Date Set for Resumption of Pretrial Hearings of 9/11 Case in Gitmo, Spokesperson Says
00:06 GMTUS Closes Del Rio Port of Entry on Texas-Mexico Border Due to Influx of Migrants
00:03 GMTNew Research Sheds Light on How to Tackle Obesity
YesterdayWhite House Confirms in Touch With France Over Envoy's Recall, Will Work to Resolve Issues
YesterdayTop Senate Defense Panel Republican Says Biden Ultimately Liable for Kabul Drone Strike
YesterdayGantz: Israel Could Accept Return to JCPOA if US Has ‘Plan B’ for Iran’s Nuclear Program
YesterdayUS Judge Denies Giuliani’s Request to Return, Destroy Seized Evidence, Reports Say
YesterdayFrench Court Finds Man Guilty of Cartoons Portraying Macron as Hitler Over COVID-19 Policies
YesterdayAustralia's Great Emu War: How a Nation Declared War on a Bird and Lost
YesterdayBlinken Vows to ‘Keep Normalization Marching Forward’ on One-Year Anniversary of Abraham Accords
YesterdayEx-Algerian President Abdelaziz Bouteflika Reportedly Dies Aged 84
YesterdayAct of Sabotage Results in Power Outage in Damascus, Energy Minister Says
YesterdayOld Friends Are Not the Best?
YesterdayMilley Assured Pelosi That US Military, Not Trump, Controlled the Nukes, Vice Chairman Says
YesterdayFed. Chief Powell Orders Sweeping Ethics Review Amid Trading Scandal at Federal Reserve
YesterdayBiden to Convene COVID-19 Summit on Margins of UN General Assembly