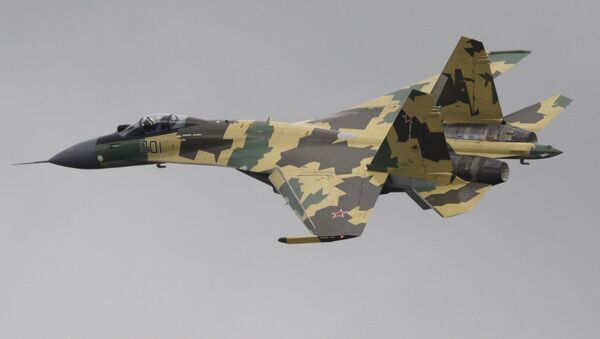 ZHUKOVSKY (Sputnik) — According to the Rosoboronexport deputy head, the surge of interest in Russian military aircraft coincided with the beginning of Russia's Aerospace Forces operation in Syria. Su-30, Su-35 airplanes, Mi-28, Ka-52 and Mi-17 helicopters are in demand as they have been "tested in combat."

"According to our estimates, the tendency for the growth of export and larger contracts on items for the Air Force will continue. We expect aviation component in Rosoboronexport contracts to go over 50 percent mark in 2017. The countries of the Middle East and of the Pacific Rim will be chief importers of this type of weaponry," Ladygin said on the sidelines of the MAKS-2017 air show.

Russia
Foreign Interest in Russia's Largest Aviation Show MAKS-2017 'Huge'
"It is no secret that aviation makes up a significant part of our exports. In the first half of 2017 alone, our contracts for the export of weaponry and military equipment for the Air Force amounted to about $2 billion. We are expecting to get more new orders by the end of MAKS," Ladygin said.

At the moment, the company's aviation-related export contracts amount to more than $19 billion.

The yearly share of this type of export has been about 45 percent throughout the last five years. In 2016, the three largest contracts signed by the company were related to aviation equipment.