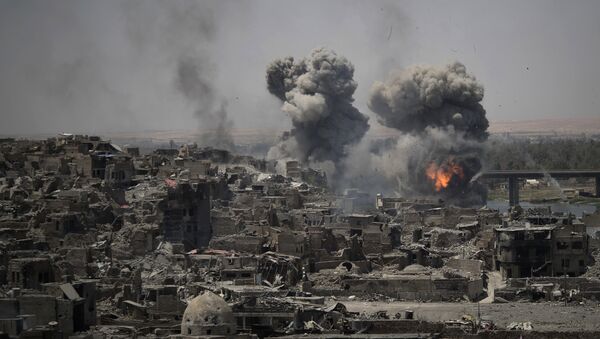 More than 40,000 civilians have reportedly perished as a result of the Mosul liberation operation, media reported, citing a Kurdish politician. Given the capabilities of modern precision weapons, this is a very large figure. A Russian military analyst explained why this has happened in an interview with Sputnik Radio.

IOM Records 380,000 Additional Persons Displaced From West Mosul
Mosul residents were killed in attacks launched both by the militants and Iraqi forces as well as by airstrikes.

“Kurdish intelligence believes that over 40,000 civilians have been killed as a result of massive firepower used against them, especially by the federal police, air strikes and Isis itself,” Kurdish politician Hoshyar Zebari said.

According to Russian military expert Oleg Glazunov  the number of civilian victims is just staggering. In an interview with Sputnik Radio he said, “First of all, right now, it's not World War II — there's a high-tech weapon that allows precise pin point hits.

“The US military however, does not take into account the losses because for them the main thing is to fulfill the assigned military task and make sure that no US citizens die in the process. Everything else does not matter to them,” the analyst said.

He further said that the US isn’t bothered by how many innocent civilians may die during the taking of Mosul.

“The US in Vietnam, Afghanistan and Yugoslavia did not take into account the losses of civilians either,” Glazunov said.

On July 11, Amnesty International issued a report saying that Iraqi forces and the US-led coalition were involved in killing and injuring civilians and destroying civilian objects instead of striking military targets.

The battle for western Mosul, according to the report, led to a civilian catastrophe in the city and the true death toll may never be known.

On July 9, Iraqi Prime Minster Haider Abadi declared the victory of the Iraqi forces in Mosul. The city was a key and symbolic stronghold of Daesh, which controlled the area since 2014. The operation to liberate the city was launched in October 2016.

Earlier it was stated by the United Nations that those Mosul residents who remain outside the city after its liberation may require up to $ 450 million in assistance.

According to the organization, the restoration of the city’s basic infrastructure will require a billion dollars.