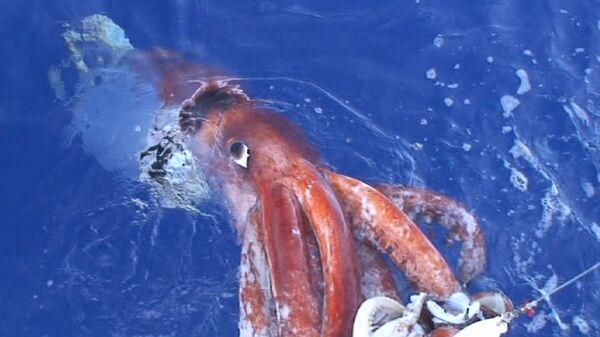 Fate smiled again on the crew of a fishing boat who caught a giant squid during a trawl 240 kilometers (150 miles) off the coast of Ireland.

Terror From the Deep: Giant Squid Pays a Visit to Japan
The 5.5-meter-long Architeuthis is the second gigantic squid to be brought ashore by the crew of the Cu na Mara trawler over the past two months.

The elusive creature, which lives in the depths of the Atlantic, was snared in a prawn net off the coast of Dingle, Co Kerry.

The Architeuthis is rarely seen by humans, and can grow to a length of over 12 meters.

In an interview with RTE, marine biologist Kevin Flannery said that catching a giant squid in Irish waters is an extremely rare experience.

"Only seven have been recorded here since records began almost 350 years ago. The very first giant squid recorded in Ireland was also landed in Dingle, when fishermen brought one ashore in 1673," he said.

Even though the elusive ocean-dwelling monster caught on Tuesday is a bit smaller than the one brought ashore in May, it is still huge enough to make local and international headlines.

Giant squid remain one of the most enigmatic sea creatures known to man.

Another Giant Squid landed in Dingle. Only 7th recorded in Ireland in 350 years. Amazingly 4 have been caught by Flannery family! @rtenews pic.twitter.com/1gWBYZr045

​Sightings of Architeuthis, thought to be the longest of all squid, date back to 1639 in Europe. However, it wasn’t until 2004 that a giant squid was actually photographed alive in its natural habitat.

The Irish fishermen’s latest catch offers scientists a rare chance to learn more about these mysterious creatures of the deep.