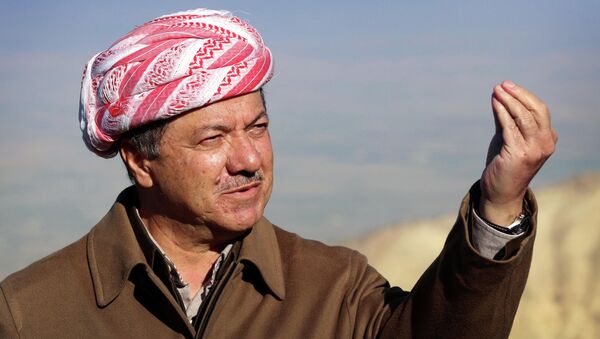 A Kurdish party criticized Masoud Barzani, the president of the Iraqi Kurdistan, over an attempt to use the referendum on the region’s independence from Baghdad to regain personal and party credibility that had been lost due to political and economic crises recently experienced by the Iraqi Kurds.

Iraqi Kurdistan Invites International Observers to Monitor Independence Vote
MOSCOW (Sputnik) – A representative of opposition Iraqi Kurdish party the Change Movement (Gorran) told Sputnik that he believes that the Iraqi Kurdistan leader attempts to use the referendum on the region’s independence from Baghdad to regain personal and party's credibility.

"The KDP and Masoud Barzani have lost credibility due to political and economic crises that have crippled Kurdish politics and economy. The referendum is to regain a degree of credibility," Shunas Sherko Jdy, a member of the Diplomatic Relations Department of Gorran, said on the possible reasons of the referendum.

The politician noted that the referendum had been called "without consensus among political parties and legislative credibility since Kurdistan Parliament was paralyzed on October 12, 2015 by armed men of the KDP."

Among other reasons for the referendum, Sherko Jdy called the opportunities provided by the referendum to the KDP and Barzani "to establish a non-democratic family rule and state that they control."

"Masoud Barzani has moved Kurdistan towards becoming part of the sectarian conflict in the Middle East and this presents huge threats to Kurdistan because the Kurds are not part of this conflict and have no interest in them," Sherko Jdy noted.

Will Iran Embrace Iraqi Kurdistan's Independence Vote?
The politician continued by saying that there was a possibility of an armed conflict between Iraq and Kurdistan in relation to the independence referendum which would be "disastrous."

"One can just look at the number of armed militias to realize that armed conflict is probably one of the greatest dangers. For some experts it could lead to the collapse of the Iraqi state and the division of Iraqi territory," Sherko Jdy suggested.

The politician reminded that the Mideast countries with significant Kurdish minorities such as Turkey, Syria and Iran, had expressed opposition to the referendum.

"Iran and Turkey are opposed to the referendum, especially Iran and they have warned of dire consequences for Kurdistan. Turkey… will accept another Cyprus if they maintain economic, military, and political control in Kurdistan, especially in KDP controlled territory where [Ankara] already has a number of military bases. Syria is not in position to take any steps that could seriously harm Kurdistan even though they oppose the referendum," the politician pointed out.

In June, Barzani set September 25 as the date for an independence referendum. The referendum will be held throughout Iraqi Kurdistan, as well as territories of the Nineveh, Kirkuk, Saladin and Diyala provinces claimed by both Kurdish Iraq and Baghdad.

Turkey Condemns Iraqi Kurdistan's Planned Independence Referendum
The referendum is viewed by a number of regional and international officials as a threat to both Iraq's and international security. Both Lt. Gen. Stephen Townsend, the commander of the US-led coalition against the IS terrorist group (outlawed in Russia), and US special presidential envoy Brett McGurk said that the Kurdish authorities should not hold the referendum amid the anti-Daesh campaign in Iraq as it would destabilize the Iraqi and Kurdish forces fighting in the region.

Iran's Foreign Minister Javad Zarif also called the planned referendum a "wrong choice" that would significantly undermine security of Iraq and the region.

The Kurdish independence issue is also complicated by the oil issue as after the referendum Baghdad risks losing a large amount of its oil reserves. According to Kurdish media reports, the Iraqi Kurdistan region has approximately 50 billion barrels of oil making around a third of Iraq's reserves.