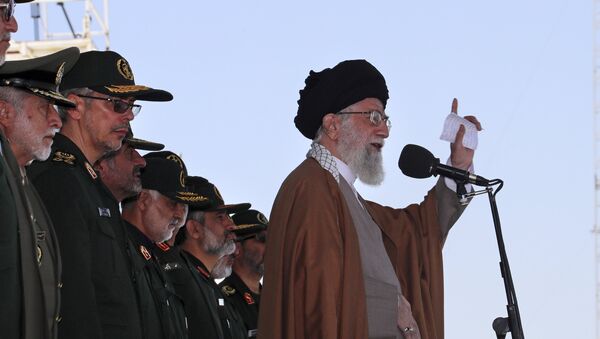 © AP Photo / Office of the Iranian Supreme Leader
Subscribe
International
India
Africa
Relations between Washington and Tehran "are only going to deteriorate" after the US decided to target more than a dozen individuals and groups with new sanctions, Max Abrahms of the Council on Foreign Relations told Sputnik – exactly what the think tank community in US capitol wants.

On Wednesday, the Trump administration announced that 18 Iranian individuals and groups, among them members of Iran’s Revolutionary Guard Corps (IRGC), would be subject to restricted commerce with US persons and businesses, despite not having involvement in the country’s nuclear program.

Russia-Iran Sanctions Bill 'Held Up' by US House of Representatives

The sparring between Washington and Tehran is a “common development according to international relations theory,” Abrahms said. This particular back-and-forth is an example of tit-for-tat “where cooperation is contingent on prior moves of the other actor.”

Abrahms is “fairly confident” bilateral relations between Tehran and Washington “are only going to deteriorate. The Washington establishment driven by the think tank community has no greater objective.”

And Iran’s growing power in the region, stemming from its “spiritual might,” is a direct threat to US Central Command in Qatar, where 10,000 troops man the Al Udeid Air Base, as well as Naval Support Activity Bahrain, a US Navy base that’s home to the Fifth Fleet.

​The US State Department had no response to a question posed by Reuters on Wednesday as to how seriously the threat posed by the IRGC should be taken.

“There’s a real concern with regard to Hezbollah and the role it plays in the region, in particular its collaboration with Iran,” Acting Coordinator for Counterterrorism Justin Siberell did say, in response to questions as to why Hezbollah was mentioned more frequently in the DoS’ Country Reports on Terrorism 2016 than in previous reports. Siberell accused Tehran of letting "Al Qaeda facilitators to operate a core facilitation pipeline through the country, enabling al-Qaeda to move funds and fighters to South Asia and Syria."

Tying Iran to terrorism has long been popular in certain Washington circles, and that hasn’t changed under the Trump administration. “Trump's advisers are also in favor of pursuing a harder line” against Iran, Abrahms explained.

Former National Security Adviser Michael Flynn announced the US was "officially putting Iran on notice” in early February. Flynn, of course, resigned two weeks later, but the Iran hawks still fly around Washington. Senator Tom Cotton of Arkansas regularly briefs the White House on foreign policy, The Hill reported; as of June 25, Cotton contended that “the policy of the United States should be regime change in Iran.”

"Add to this Iran's growing influence in Syria and the passing of time from the start of the nuclear deal and I foresee bilateral tensions rising,"Abrahms said.

"As in other countries, the Iranian leadership takes into account not only strategic considerations, but also domestic ones," he said. "Neither the US nor Iranian leaders want to seem soft to their domestic constituencies. Sanctions against Iran, I predict, is just one of a broader set of countermeasures coming against Iran."