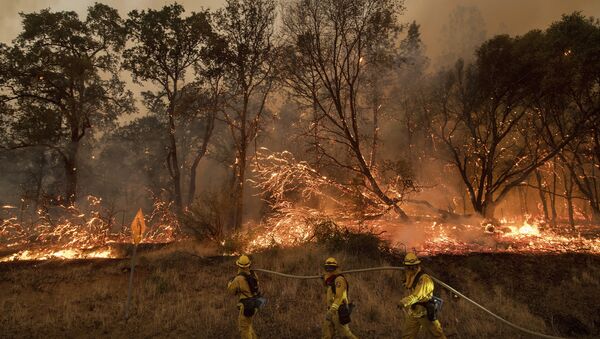 The Detwiler fire began near Lake McClure and has been feasting on dry grass and brush since then. An exceptionally wet winter followed by a very hot and dry summer has given the fire plenty to snack on.

"I can't emphasize enough how active and erratic this fire activity is," Mariposa County Sheriff Doug Binnewies said in a statement. "It's done stuff that we haven't seen before."

The small city of Mariposa has been completely evacuated along with numerous other communities, totaling over 4,000 Californians displaced. Governor Jerry Brown has declared a state of emergency in Mariposa County.

Watching as #DetwilerFire crawls over this ridge towards community of Mariposa. pic.twitter.com/nUUi1RCANg

The fire almost doubled in size from 39 to 70 square miles in area between Tuesday night and Wednesday morning, according to the California Department of Forestry and Fire Protection (Cal Fire).

"The communities of Hunters Valley, Bear Valley, and Hornitos continue to be threatened as the fire encroaches on culturally and historically sensitive areas," Cal Fire said. In addition, the flames are licking power lines that service Yosemite National Park, the most famous nature preserve in the United States. The fire is still 35 miles away from the Park, which remains open.

A shot of the #DetwilerFire in #Mariposa, near the Bridgeport area as the flames spread south. VLATs are making water drops pic.twitter.com/bPvii3IjaQ

More than 2,200 firefighters have trudged deep into the county's forests to try to extinguish the flames, but they are steadily being pushed back and closer to human settlements. Nine tanker planes and 11 helicopters have taken the battle against the fire to the skies.

Sacramento Fire crews operating on the #DetwilerFire in Mariposa county. The fire has grown since yesterday, now over 45,000 acres. pic.twitter.com/CNIO80J52S

"It is the fuels that are extremely flammable right now due to heavy rains this winter with widespread growth and then extended heat waves this summer, which has created a powder keg for fast-burning fuels," wrote the National Weather Service in a statement. "Even terrain-driven winds can become stronger depending on fire behavior and fuels.

Incredible video from inside the #DetwilerFire. Thanks to @lompoc_firefighters for sharing this video and thanks to all the firefighters doing all they can to keep us safe! Stay with ABC30 and ABC30.com for the latest info.

The "extreme and aggressive fire behavior" has been frustrating the attempts of firemen to contain it as favorable winds allow the fire to spread faster than it can be suppressed. Only seven percent of the fire has been contained, and at least eight structures have been destroyed by it. Another 1,500 structures are threatened by the fire.