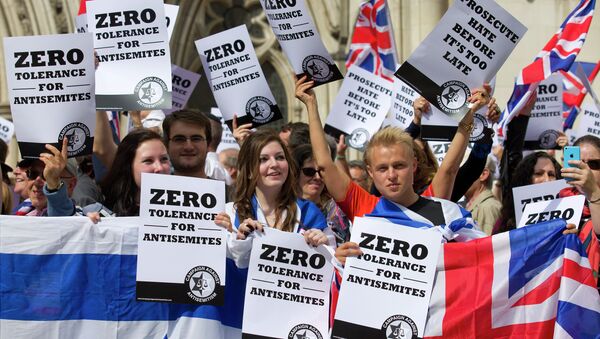 Campaign Against Antisemitism (CAA), a group that aims to combat racist behavior directed at the Jewish community, said that comparatively, Britain is one of the best countries in the world in which to be Jewish, but there is a "rising tide of antisemitism in the country and it is at a tipping point."

New report by CAA shows that antisemitic crime surged 44% since 2014, but only 15 cases were prosecuted last yearhttps://t.co/iKhiUAVpd4

​In 2016, the Community Security Trust (CST), an organization that aims to protect Jewish communities, released a report, which outlined the growing number of anti-Semitic behavior in the UK.

​One account tells the story of a man who was clearly Jewish, and traveling on a train in London, when another man approached him and started shouting:

"Evil Jew, why are you murdering my people? I'm going to come over and slap you."

​A 2017 policy report published by the Antisemitism Policy Trust, has defined anti-Semitism as: "Any remark, insult or act the purpose or effect of which is to violate a Jewish person's dignity or create an intimidating, hostile, degrading, humiliating or offensive environment for him is anti-Semitic. This reflects the definition of harassment under the Race Relations Act 1976. This definition can be applied to individuals and to the Jewish community as a whole."

An CST spokesperson told Sputnik about the proactive approach people are taking to ensure Jewish schools, buildings and synagogues are secure, adding that security guards are placed outside Jewish buildings and places of worship to fight against terrorism.

"There is an ongoing terrorist threat in society, but also specifically against the Jewish community, we have seen this in Europe over the past few years. [Security guards] are there to try and prevent and deter hate crime.

"The types of hate crime that occur are things being shouted and thrown at Jewish people, as well as anti-Semitic graffiti or comments and images on social media. Thankfully most of the anti-Semitic hate crime that takes place isn't violent, and most of the violent ones do not involve a serious level of violence, but they can still be pretty distressing for people," a CST spokesperson told Sputnik.

According to the CST, historical roots of anti-Semitism have been around for centuries, and although most people in the UK have a positive view of Jewish people, it has become a bigger problem in recent years.

"The historical roots [of anti-Semitism] are varied. If you go back in history, there is religious anti-Semitism and conspiracy theories of Jews controlling governments, the banks and starting wars. There is the modern type of anti-Semitism that takes place in the debate of the Israel and Palestinian conflict," the spokesperson told Sputnik.

"What we're seeing now, especially on social media is a real return of the conspiracy theory anti-Semitism, often from people who don't really understand the historical roots of the ideas and the images that they're spreading. But we see a lot of this now on social media, memes of the Rothschilds that mimics old fashion anti-Semitic conspiracy theories from 100 years ago," they added.

​According to some, reporting anti-Semitic behavior is key to ensuring people are prosecuted. But the results from the CAA, suggest the police are prosecuting less anti-Semitic crimes than ever before. However, the impact of anti-Semitism on the community is clear to see.

"When a hate crime occurs against one synagogue, it causes ripples throughout the Jewish community. Anti-semitism has been in the news over the last few years, partly because of everything that has happened with the Labour party, but its left Jewish people feeling less secure, and a bit less certain of their place in society then 5 or 10 years ago," an CST spokesperson told Sputnik.