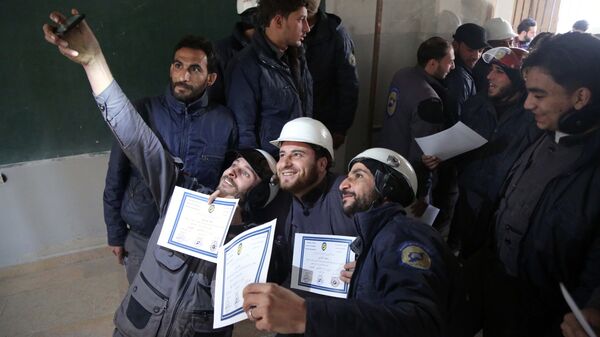 'White Helmets' Participate in Smear Campaign Against Syria Gov't - Moscow
White Helmets claims to be an impartial humanitarian NGO saving lives in Syria, however, Russian and Syrian officials as well as independent experts on the conflict voice heavy criticism about the true motives behind the organization's work.

Syrian President Bashar Assad asserted that the White Helmets are al-Qaeda members, while Russian Foreign Ministry spokeswoman Maria Zakharova slammed the activists for their involvement in a defamation campaign targeting the Syrian government.

Radio Sputnik discussed with Vanessa Beeley, an independent investigative journalist who specializes on the Middle East and Syria in particular, the White Helmets organization and why US officials are seen posing with its activists.

“This is an extra ordinary propagation of the lies that is being basically used against the sovereign nation of Syria, the elected Syrian government and the Syrian army that comes from the people defending its own nation from a proxy terrorist invasion,” Beeley said.

She further said that, “when we see these pictures being taken it’s a monstrous justification for this organization and not only this organization but all such activists which have been proven to be affiliated to the extremist factions, particularly in east Aleppo and who have been plat formed by western state aligned media, by NATO aligned think tanks and NGOs,” she added.

Meanwhile the White Helmets were seen in photographs with US officials such as Hilary Clinton, US ambassador to UN Nikki Haley, US Congressman Adam Kinzinger and Bernie Sanders.

Looking at why the US government officials would meet and pose for photos with staged “activists” the journalist said that the “White Helmets are clearly used as propaganda that demonizes the Syrian government and produces the enabling of further intervention by the NATO and the Gulf states into Syria.”

Aleppo Boy Story: Another Example of White Helmets 'Doing What They're Paid for'
In 2016, a Netflix movie about the organization won an Academy Award for the Best Documentary, however, Vanessa Beeley who was present on the ground in Aleppo during its liberation claims that the White Helmets were not helping the civilians and the organization's rescue operations were all staged.

In June, the father of a Syrian boy named Omran Daqneesh, whose image is sometimes regarded as a symbol of the Aleppo children’s suffering, came forward to reveal that instead of rushing to rescue Omran, the White Helmets stood by and filmed the little boy for their anti-government propaganda campaign.

White Helmets Volunteer Caught With Rebels Dumping Beheaded Bodies
RT Editor-in-Chief Margarita Simonyan said the broadcaster could take CNN correspondent and host Christiane Amanpour to Syria to meet Omran Daqneesh, the Syrian boy who was considered by mainstream media to be a symbol of children suffering in Aleppo but was later revealed to have been manipulated by the White Helmets volunteers while his family was threatened.

However, this was not the first fake footage provided by the While Helmets. The Swedish NGO Doctors for Human Rights (SWEDHR) has accused the White Helmets of falsifying information about their work in Syria, including on the situation in Idlib.

According to the activists, the White Helmets staged their so-called "rescue" attempts shown in their videos for purposes of propaganda.

Talking about that Beeley told Sputnik that the White Helmets were actually there to serve the al-Nusra Front terrorists.

“The White Helmets throughout Syria are extremists affiliated and their evidence cannot be considered credible or legitimate and I would consider that is why the IPCW decided to leave them out of their evidence,” Beeley concluded.