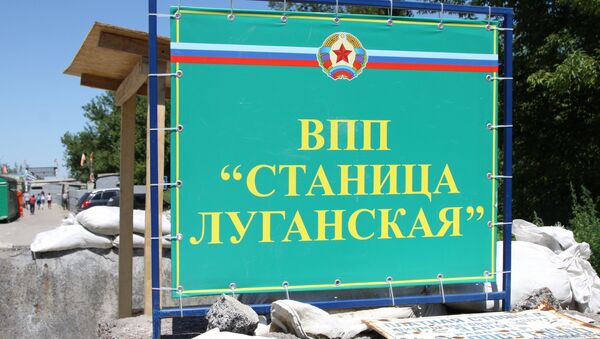 "The LPR's Ministry of State Security detained an infiltrator who had been planning to perpetrate a high-profile terror act under the Ukrainian security services order, which should have targeted foreign individuals and civilians of the republic," Evgeniya Lyubenko said in a video posted on the ministry's website.

The ministry's data showed that the detained suspect was Ukrainian national Ruslan Donich, the spokeswoman noted.

"In February he had been recruited by the Ukrainian security services and transferred to Lugansk for the implementation of the tasks imposed on him," Lyubenko added.

US Embassy in Ukraine Confirms Blast in Kiev, Rules Out Terrorism
According to Lyubenko, the LPR authorities believe Donich was responsible for planting an explosive device in a restaurant complex in central Luhansk.

"The attempt to carry out an act of sabotage and terrorism has been prevented by the LPR law enforcement. However, Donich managed to flee then. His detention resulted from the special operation planned by the Ministry of State Security. He is now giving testimony," Lyubenko pointed out.

The Donetsk People's Republic (DPR) alongside the LPR was declared by the local authorities on the territory of the Donbass region in 2014, amid residents’ protests against the Kiev authorities, which had come to power by what many consider to be a coup. The situation in Eastern Ukraine has been unstable since then.