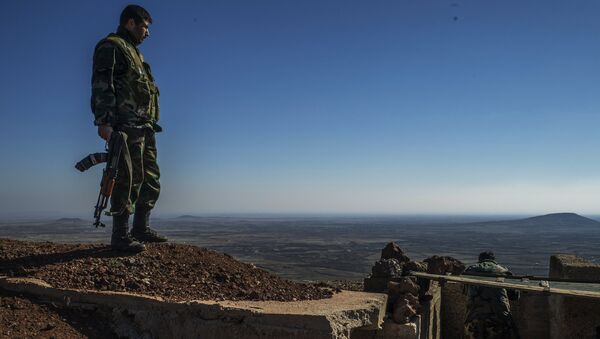 © Sputnik / Valeriy Melnikov
/
Go to the photo bank
Subscribe
The Golan Heights has been one of the major hotspots in Syria throughout the country's civil war. A Sputnik correspondent witnessed the humanitarian aid being distributed in the Jiba settlement, located in the Quneitra province in the Golans.

QUNEITRA (Sputnik) — It was the first humanitarian operation carried out in the village after Quneitra was included in the south-western safe zone regardless of the terrorists being deployed 1.2 miles away from Jiba.

Hoping for the Better

Israeli Jets Attack Syrian Troops in Golan Heights for the 4th Time in a Week
Syria's border with Israel is 40 minutes away from Damascus by car. Jiba the second further settlement from the Israeli-controlled territory outpost of the Syrian army in the Golan Heights; Isra located the closest.

Jiba is among a dozen other villages which have recently joined the southwestern de-escalation zone. Just 10 days ago, fighting in the village was underway, but since Russia and the United States agreed on introduction of a ceasefire regime in Amman on July 7, there is now hope for a peaceful life for thousands of Syrian citizens.

Quneitra used to host Syria’s elite forces that were getting ready for a possible Israeli intervention, the Sputnik correspondent was told.

Today marks the first time for months that Jiba’s citizens have gathered in the settlement’s center to receive humanitarian aid. The Russian reconciliation center along with the Syrian troops delivered food and essential goods for 500 families.

"Now the situation is much better. Thanks to the Syrian army and Russia for saving us from terrorism," an elderly Jiba man said, adding that it looks like everything was getting better.

Nusra Front Launches Deadly Missile Attack on Golan Heights
While children living in the settlement expressed the most obvious expressions of gratitude, its residents were hospitable toward the troops who delivered the aid, calling them guests.

While the humanitarian assistance was being distributed, Russian and Syrian experts arranged a temporary site for medical treatment in a nearby building.

"Doctors’ visit is a salvation for us. Our girl has been examined and given necessary treatment," a woman said as she was leaving the doctor.

US, Russia Working on Second Ceasefire Agreement in Syria - Trump
After the humanitarian mission was over, two Russian officers, accompanied by the Syrian servicemen, went to the front line to assess the situation at the safe zone's border. A senior officer met the delegation as it was leaving the settlement.

"Now everything is quiet, there is the furthest point [we control] some hundreds meters in front. A militants-controlled settlement follows. There is no communication between us, there are three roads and all of them are blocked. We have left only one small path for the militants, who want to lay down their weapons," a senior Syrian officer said, as they accompanied the Russian officers to the border.

For the most part, the region was shrouded in silence for over a week. However, servicemen acknowledged that militants had initiated several provocations during the week and started firing against government forces.

Pro-Damascus forces continue conducting negotiations with the leaders of armed groups, calling on them to lay down their arms and return to their peaceful lives. Civilians and authorities believe that the political way out of the crisis is possible and the bloodshed is about to end.