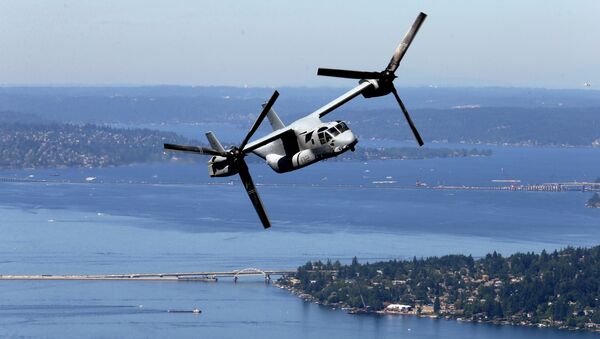 © AP Photo / Elaine Thompson
Subscribe
International
India
Africa
One US Marine has been declared brain-dead, and another was injured, after lightning struck a Bell Boeing MV-22 Osprey vertical takeoff and landing aircraft that they were both working on. The incident occurred at the Marine Corps Air Station New River in North Carolina on July 11.

The Marines were performing maintenance on one of the Ospreys operated by Marine Medium Tiltrotor Squadron 261 (VMM-261), also called the "Raging Bulls." As the men went to leave the hangar, lightning struck the Osprey and injured both of them. Both men were rushed to Camp Lejeune Naval Hospital and treated for "serious injuries."

One of the Marines, whose name was not released, was discharged that same day. But Corporal Skyler James was kept in the hospital, though ultimately declared brain dead following "several days of treatment and evaluation." He remains alive through the use of a ventilator.

James hails from Sonoma, California, and became a Marine in March 2014 according to a statement from his commanding officer, Lt. Col Stephen Pirrotta. "Cpl. Skyler James was a hardworking Marine full of work ethic, ability, and drive," the statement read, "He was quick to smile and ready to accept any maintenance challenge on the flight line [hangar] with a demeanor that allowed for easy interaction between his peers and superiors, alike."

"This was a tragic accident. Corporal James will be sorely missed by the Raging Bulls. His family is in our thoughts and prayers."

Initially, the Marine Corps reported that James had died. This came seven days after the lightning strike. The Corps moved slowly due to the development and deterioration of James' condition.

In his time in the service, James earned a Good Conduct medal, a Sea Service Deployment ribbon, a Global War on Terrorism Service medal, a National Defense Service medal and a promotion to corporal in October 2016.