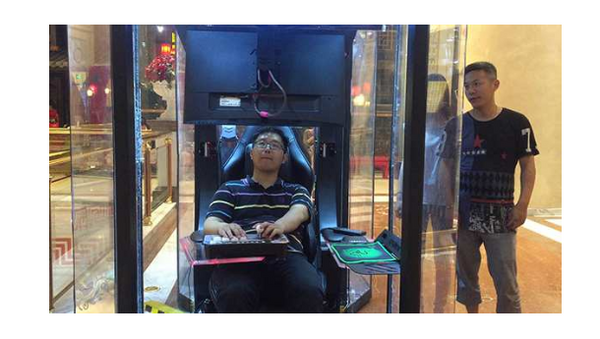 © Global Times
Subscribe
Shopaholic women in Shanghai no longer have to drag their hubbies with them around the mall, thanks to the “husband storage” facilities recently offered in a Shanghai mall.

Google Tried to Restrict Coverage of Gender Discrimination Case Filed by US
The "husband storage" facility is a glass box equipped with electronic devices such as monitor, computer and gamepad.

According to an employee with the mall, the facilities serve as rest station for husbands not interested in shopping. On the other hand, wives do not have to worry about their spouses who are always eager to return home.

A citizen surnamed Wu thinks the husband storage facilities are a good idea since he is not a shopping fan. The facilities provide men with space for entertainment while their women take their time in the mall, he added.

However, some users of the facilities also pointed out the shortcomings. A citizen complained about the poor ventilation, while another man said the control of the devices was not very satisfying.

Some women hold that men have their roles as shopping companions. They can carry the heavy bags, give directions, and more importantly, give advice. "Shopping for me will be boring if my husband is busy playing video games," a woman said.

Currently, four boxes have been placed in free service at the mall for about a month. After optimization of the devices in the second half of the year, the facilities will be charged, mall officials said.