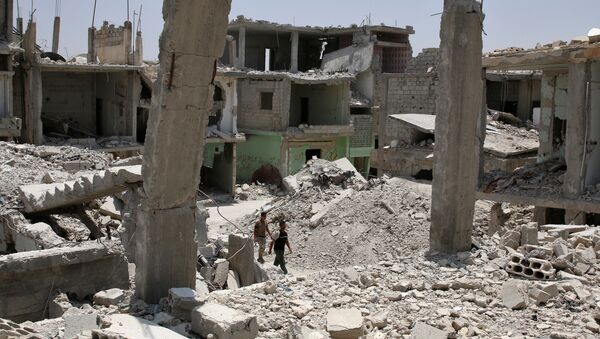 By taking a softer stance toward Syria, France wants to ensure that the country's companies will be contracted by Damascus to take part in the Arab country' reconstruction once the civil war is over.

Macron Explains Why France No Longer Insists on Assad's Removal From Power
MOSCOW (Sputnik) — France’s decision to no longer insist on Syrian President Bashar Assad to step down as part of the Syrian settlement is aimed at ensuring that the French companies will be contracted by Damascus to take part in the Arab country' reconstruction once the civil war is over, Belgian lawmaker Frank Creyelman of right-wing Vlaams Belang party told Sputnik.

"The war in Syria is coming to an end. France is now preparing for the reconstruction of Syria and its firms want to take part in the reconstruction. They see that president Assad has the support of the Syrian people and that he will win. ‘Significant change’ will be democratic elections observed by international observers. If Bashar Assad takes part in these elections he will win. France knows that. [President Emmanuel] Macron knows that. And Macron is the guy from big business in France," Creyelman, who is in fact also an honorary member of the Flemish parliament, said.

"It's a cynical move that will be followed by others as the pressure of the construction (and other) firms to take part in the wharf of the century will be intensified. So yes, I think other countries will follow," the Belgian politician argued.

On July 13, Macron said France had changed the French doctrine with regard to Syria and prioritized the eradication of terrorist groups in the war-torn country, while also declaring that France has shifted to believe that "the departure of Assad is no longer a necessary condition" for an inclusive and sustainable political solution in Syria.

A range of countries, including China, Lebanon and Russia have already expressed interest in the reconstruction of post-war Syria.

Damascus will need some $200 billion for restoring the infrastructure ruined during the military conflict, according to the International Monetary Fund (IMF).