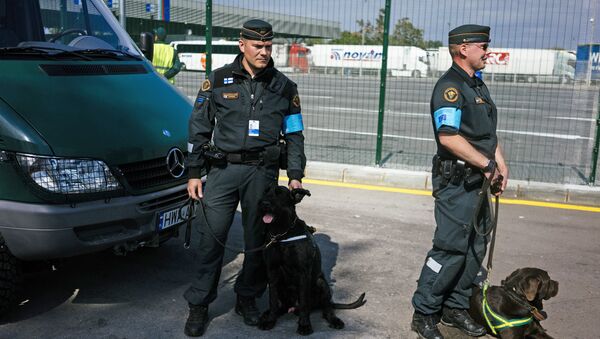 © AFP 2021 / DIMITAR DILKOFF
Subscribe
Amid incessant anti-Russian paranoia, Finland is set to grant its Border Guard additional powers for use against hybrid warfare. To fight off ‘little green men,' a term coined to denote foreign soldiers without insignia, the Finnish Border Guard will be able to shoot down drones, bug suspects and jam mobile networks.

Finland's Cold War Tunnels: Russia's 'Calm Line' to Cure This 'Schizophrenia'
A new bill presented in the Finnish parliament will authorize the Finnish Border Guard to employ the same tactics as police, including the use of military force. In a bid to prevent international hybrid warfare, the Border Guard's defense capabilities against serious border incidents or IT systems failure will be significantly bolstered, Finnish national broadcaster Yle reported.

While the proposed measures are said to also combat illegal immigration, people smuggling and hostage scenarios, it is obvious that the fictitious "Russian threat" was the main reason behind them, as Finland's recent actions clearly indicate.

Last week, Finland passed a law outlawing so-called "little green men," or military forces operating without recognizable insignia, which in Scandinavia came to imply Russian soldiers. Earlier this week, Finland was reported to revive its Cold War-era system of tunnels and bunkers in the metropolitan area in a bid to survive the ludicrous possibility of a Russian attack.

The Border Guard's legal chief of staff Ari-Pekka Koivisto made no secrets as he attributed the measures to Crimea's re-unification with Russia, which in Nordic political circles is perceived as "occupation." Koivisto called it a "wake-up call" for the monitoring of Finland's frontiers.

Fear-Stricken Finns Feel Uneasy About Real Estate Being Sold to Russians
The idea behind the bill is to help border guards hold down the fort until reinforcements arrive, in case of a serious border incident. Fittingly, the Border Guard's jurisdiction would be extended by hundreds of meters.

One of the most eye-catching changes proposed in the bill is to use military conscripts as backup. At present, only Border Guard trainees and students of the Border Guard and Coast Guard Academy are eligible as crisis support.

Among other extra powers, the Border Guard will be given the right to utilize covert information-gathering techniques, such as tapping mobile phone network base stations, located in the vicinity of border crossing points.

Guards will also be allowed to jam mobile telecommunication networks in order to make it harder for "little green men" to coordinate their actions. Only the Finnish authorities' encrypted Virve network would remain unaffected by jammers.

Suomi Snubs Finnish-Russians for Fear of 'Little Green Men'
Finally, the Border Guard would also be able to keep a closer eye on the airspace along the border, being empowered to shoot down or otherwise render harmless drones and other unmanned aircraft to prevent spying. Border staff would also receive technology to locate and take control of drones.

"Hybrid threats typically escalate very quickly and are difficult to anticipate," deputy commander Jaakko Olli from the South-East Finland Border Guard told Yle. "These new powers will allow us to react to situations quicker and more effectively, even in everyday conditions," he said.

The bill will be discussed in parliament in the autumn, and is expected to come into effect in the spring of 2018.

Earlier this year, NATO and the EU signed an agreement on establishing a European Centre of Excellence to counter hybrid threats in Helsinki.

The Helsinki Center is expected to become a complement to Stratcom's similar centers in Tallinn, Estonia and Riga, Latvia, both of which are undisguised NATO outposts in the battle against the perennial "Russian threat."

000000
Popular comments
It seems the Finnish government is afraid that their citizens just might be happy if the "polite people" were to show up and grant to them the opportunity to hold a fair and open referendum on joining NATO?
Erik Trete
19 July 2017, 11:02 GMT2
000000
The US does not have a military base in Finland which leaves the US vulnerable via the Arctic.. That is the only reason for the paranoia. And of course a military base is a persuasive instrument to follow the US trade line. Sweden is already coerced with militant ISIS performing the US role.
professor.hornblow
19 July 2017, 11:52 GMT2
000000
Newsfeed
0
New firstOld first
loader
LIVE
Заголовок открываемого материала
Access to the chat has been blocked for violating the rules . You will be able to participate again through:∞. If you do not agree with the blocking, please use the feedback form
The discussion is closed. You can participate in the discussion within 24 hours after the publication of the article.
To participate in the discussion
log in or register
loader
Chats
Заголовок открываемого материала
Worldwide
InternationalEnglishEnglishMundoEspañolSpanish
Europe
DeutschlandDeutschGermanFranceFrançaisFrenchΕλλάδαΕλληνικάGreekItaliaItalianoItalianČeská republikaČeštinaCzechPolskaPolskiPolishСрбиjаСрпскиSerbianLatvijaLatviešuLatvianLietuvaLietuviųLithuanianMoldovaMoldoveneascăMoldavianБеларусьБеларускiBelarusian
Transcaucasia
ԱրմենիաՀայերենArmenianАҧсныАҧсышәалаAbkhazХуссар ИрыстонИронауОssetianსაქართველოქართულიGeorgianAzərbaycanАzərbaycancaAzerbaijani
Middle East
Sputnik عربيArabicArabicTürkiyeTürkçeTurkishSputnik ایرانPersianPersianSputnik افغانستانDariDari
Central Asia
ҚазақстанҚазақ тіліKazakhКыргызстанКыргызчаKyrgyzOʻzbekistonЎзбекчаUzbekТоҷикистонТоҷикӣTajik
East & Southeast Asia
Việt NamTiếng ViệtVietnamese日本日本語Japanese俄罗斯卫星通讯社中文（简体）Chinese (simplified)俄罗斯卫星通讯社中文（繁体）Chinese (traditional)
South America
BrasilPortuguêsPortuguese
NewsfeedBreaking
01:43 GMTIRGC Chief: Iran No Longer Sees US as Threat - Report
01:18 GMTChinese Covid Vaccines Reach 100 Nations, But WHO Warns Africa Still Short 470 Million Shots in 2021
01:04 GMTAwkward Moment as White House Staff Cuts Off Biden-Johnson Meeting in Mid-Sentence
00:20 GMTVideo: Military Jet Intercepts Small Aircraft Over NYC in the Middle of UN General Assembly
00:19 GMTPark Ranger ‘Implored’ Gabby Petito to Distance Herself From Toxic Relationship With Brian Laundrie
YesterdayVideos: 6.0 Earthquake Strikes Southeastern Australia
YesterdayPro-Reunification Candidate Chang Ya-chung Edges Ahead as Chairman Election in Taiwan’s KMT Nears
YesterdayTexas Governor Vows to Prevent Del Rio Migrant Surge Disaster From Being Replicated
YesterdayUber’s Business Model Faces Threat After Legal Setback Across Europe
YesterdayUS Lawsuit Challenges Alliance of 2 Airlines for Stifling Competition
YesterdayTaliban Say No Al-Qaeda Members Present in Afghanistan
YesterdayJoe Biden Faces Backlash Over Inept UN Speech
YesterdayUS Democrats Strike Down $1Bln in Israel Defense Aid to Keep US Govt Running, Reports Say
YesterdayPope Jokes ‘Some People Wanted Him Dead’ While He Was Undergoing Surgery, Reports Say
YesterdayNo American Dream for Haitians
YesterdayBoris Johnson Contradicts Joe Biden With Claim of Intelligence That Taliban Could Take Kabul
YesterdayPelosi Accuses GOP of ‘Trying to Force First-Ever US Default’ by Opposing Limit Suspension Bill
YesterdayFamily Lawyer Confirms Human Remains Found in Wyoming Belong to Gabby Petito
YesterdayFrench President Macron's Health Pass QR-Code Leaked to Internet - Reports
YesterdayThe US Space Force’s Oldest Adversary, Social Media, Roasts Their New Uniforms