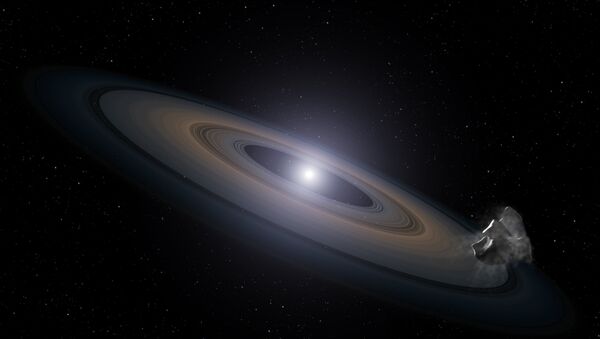 CC BY 2.0 / NASA Goddard Space Flight Center / NASA Goddard Space Flight Center NASA's Hubble Space Telescope Finds Dead Stars 'Polluted with Planet Debris'
Subscribe
A new Earth-sized exoplanet has been discovered with a peculiar and ultra-short orbit around its host star, completing a revolution every four hours and 20 minutes. There’s a joke in there somewhere, but we don’t know what it’d be.

The planet is named EPIC 228813918 b, and it has the second-shortest orbital period of any planet ever discovered. The new planet has a radius 0.89 times as large as Earth's, but it's much denser than our little blue marble — about 249 times denser, giving it a mass more than twice that of Saturn. Located 310 light years from Earth, EPIC orbits an M-type red dwarf.

EPIC was identified by an international team lead by Alexis Smith of the German Aerospace Center's (DLR) Institute of Planetary Research in Berlin. A paper proving that EPIC was a planet, not a small star, was published on arXiv.org on July 14.

"We use its K2 light curve, radial velocities, archival images, adaptive optics imaging and a catalog of [eclipsing binary stars (EB)] to demonstrate that EPIC 228813918 is a transiting planetary system, and not an EB," the paper reads.

They also identified the star's chemical composition: an iron core surrounded by a silicate mantle, just like Earth.

"Discovering and characterizing extreme systems, such as ultra-short-period planets like EPIC 228813918, is important, as they offer constraints for planet formation theories. Furthermore, they allow us to begin to constrain their interior structure and potentially that of longer-period planets too, if they are shown to be a single population of objects," the team added.

Unfortunately for EPIC, it missed out on the universe record by only four minutes. KOI-1843b also orbits an M-dwarf, but that planet completes an orbit every four hours and 16 minutes. Also like EPIC, KOI is roughly Earth's size.

000000
Popular comments
there wouldn't be any point in trying to put things off until tomorrow on either of those planets, now would there? :)
michael
22 July 2017, 10:38 GMT
000000
Newsfeed
0
New firstOld first
loader
LIVE
Заголовок открываемого материала
Access to the chat has been blocked for violating the rules . You will be able to participate again through:∞. If you do not agree with the blocking, please use the feedback form
The discussion is closed. You can participate in the discussion within 24 hours after the publication of the article.
To participate in the discussion
log in or register
loader
Chats
Заголовок открываемого материала
Worldwide
InternationalEnglishEnglishMundoEspañolSpanish
Europe
DeutschlandDeutschGermanFranceFrançaisFrenchΕλλάδαΕλληνικάGreekItaliaItalianoItalianČeská republikaČeštinaCzechPolskaPolskiPolishСрбиjаСрпскиSerbianLatvijaLatviešuLatvianLietuvaLietuviųLithuanianMoldovaMoldoveneascăMoldavianБеларусьБеларускiBelarusian
Transcaucasia
ԱրմենիաՀայերենArmenianАҧсныАҧсышәалаAbkhazХуссар ИрыстонИронауОssetianსაქართველოქართულიGeorgianAzərbaycanАzərbaycancaAzerbaijani
Middle East
Sputnik عربيArabicArabicTürkiyeTürkçeTurkishSputnik ایرانPersianPersianSputnik افغانستانDariDari
Central Asia
ҚазақстанҚазақ тіліKazakhКыргызстанКыргызчаKyrgyzOʻzbekistonЎзбекчаUzbekТоҷикистонТоҷикӣTajik
East & Southeast Asia
Việt NamTiếng ViệtVietnamese日本日本語Japanese中国中文Chinese
South America
BrasilPortuguêsPortuguese
NewsfeedBreaking
19:33 GMTGlobal Oil Prices to Average $70 per Barrel in 2022, US Energy Agency EIA Says
19:31 GMTUS DoJ Seeks to Strip Steve Bannon's Defence of Main Evidence Ahead of Criminal Contempt Trial
19:30 GMTJust 3 in 5 US Republicans Trust Doctor Advice, Down 13 Points During Pandemic – Poll
19:13 GMTState Department Spokesperson Price Briefs Press in Washington, DC
18:27 GMTUS Slaps Commander of Iran's IRGC Basij Forces With Sanctions
18:18 GMTBiden Warns Putin of Economic Sanctions and Other Measures in Event of Ukraine Military Escalation
18:18 GMTWashington's Major Intersection Blocked by Protesters Demanding Cut to Defense Budget
18:05 GMTCapitol Riot Probe: Mark Meadows to Cease Cooperation With Jan. 6 Panel
17:59 GMT80th National Pearl Harbor Remembrance Day Held in Hawaii
17:53 GMTProposed US Defense Spending Bill Does Not Include Nord Stream 2 Sanctions
17:45 GMTMinsk Introduces Embargo on Some Goods in Response to Western Sanctions
17:37 GMTPentagon: Terrorist Threat to US From External Attacks Lowest Since 9/11
17:30 GMTUS Judge Rules Against Coronavirus Vaccine Mandate for Federal Contractors
17:17 GMTIOC Executive Board Holds Press Conference Amid US Diplomatic Boycott of Beijing Olympics
16:51 GMTIsraeli Prime Minister Claims Country Is 'Fighting Off Forces of Evil' Every Day
16:51 GMTApple CEO Reportedly Lobbied Chinese Officials to Get Preferential Treatment in Country
16:44 GMT'F**k You': Rittenhouse Hits Back at LeBron James After Basketball Star Doubts Tears in Court
16:38 GMTCan It: Elon Musk Rips Joe Biden’s Build Back Better Bill, Calls on Senate to Not Pass It
16:31 GMTUS Would Urge Germany to Halt Nord Stream 2 Pipeline if Russia Invades Ukraine, Reports Say
16:16 GMTMan Kills Family, Himself Over Fake Vaccine Certificate in Germany, Reports Say