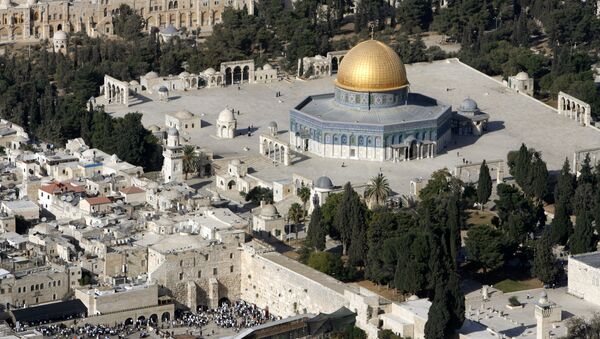 Over 30 people protesting against the recently installed metal detectors at the Temple mount complex in Jerusalem were injured in clashes with the security forces, local media reported.

MOSCOW, July 19 (Sputnik) — According to the Jerusalem Post newspaper, the clashed broke out near the Lions' Gate, where Jerusalem's Muslims were praying as an act of protest against the authorities' decision to install metal detectors at a holy site.

US to Maintain Dialogue With Israel on Halting Iranian Ambitions in Syria
Police spokesman told the newspaper that nearly a hundred of protesters threw stones and Molotov cocktails at policemen, while the exact reasons for the violence were yet unclear. The rioters were reportedly dispersed.

On Friday, two Israeli policemen died, and a third was wounded after three armed assailants opened fire at the Temple Mount complex. The police pursued and killed the assailants. Following the attack, the complex was cleared of visitors and closed off to carry out searches at the site. The Israeli authorities later decided to install metal detectors at the entrances to the Temple Mount and mount video cameras to monitor what is happening on its territory.