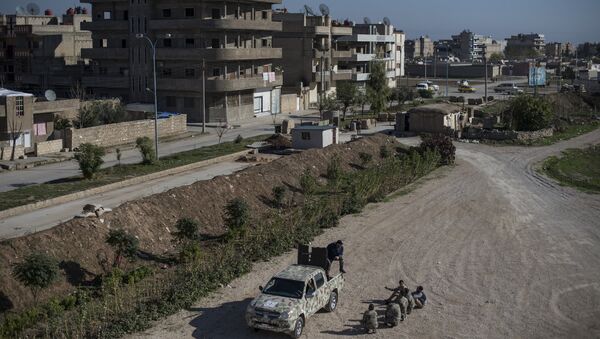 © Sputnik / Valeriy Melnikov
/
Go to the photo bank
Subscribe
The United States now has as many as 10 military posts in Syria on the territory controlled by the Kurdish Democratic Union Party (PYD) and Kurdish People's Protection Units (YPG), the Anadolu news agency reported.

State Senator Calls US Base in Syria a Violation of International Law
MOSCOW (Sputnik) — According to the media, two air bases in the area of ​Rmeilan of the province of Hasakah have been operating since October 2015. In March 2016, a helicopter base was opened in the Harab Isk village near the city of Kobani, which also serves as a staging post on one of the routes for delivering military aid to the Syrian Kurds.

In addition, three more military points are mentioned in the province of Hasakah. One of them hosts some 100 US servicemen and the other about 150. These bases are focused on the struggle with Daesh terrorist group. Two more points of deployment of the US troops are located in the town of Manbij, where operations are conducted against the forces of the Free Syrian Army (FSA).

The outlet also reported about three more posts in the north of the province of Raqqa. Two of them host French troops alongside US personnel. The third one is used for transferring equipment to Kurdish forces, as well as being a communication center of the US-led coalition forces.

Anadolu noted that the locations of the US forces are often designated as "closed zones" and are classified. Troops help airstrikes and shelling, train local forces and conduct operational planning. Some units also participate in active combat operations.

What is Known so Far About US Building 'New Military Base' in Syria
The bases are equipped with highly maneuverable artillery batteries, rocket launchers, mobile reconnaissance equipment and armored cars, Strykers in particular.

"The release of sensitive military information exposes Coalition forces to unnecessary risk and has the potential to disrupt ongoing operations to defeat ISIS [Daesh]," Pahon said.

"For operational security reasons, we do not disclose the locations of Coalition forces operating in Syria to defeat ISIS," Pahon said. "While we cannot independently verify the sources that contributed to this story, we would be very concerned if officials from a NATO ally would purposefully endanger our forces by releasing sensitive information. We have conveyed these concerns to the Government of Turkey."

Ankara considers the PYD and the YPG to be affiliated with the Kurdistan Workers' Party (PKK), listed as a terrorist organization in Turkey. However, the PYD and the YPG, as well as the Kurdish-led Syrian Democratic Forces (SDF) have been receiving support from the United States in fighting Daesh terrorists in Syria.

On May 9, the US Defense Department announced that President Donald Trump had approved a plan to arm Kurdish YPG in order to better fight against terrorism in Syria despite objections from Turkey.