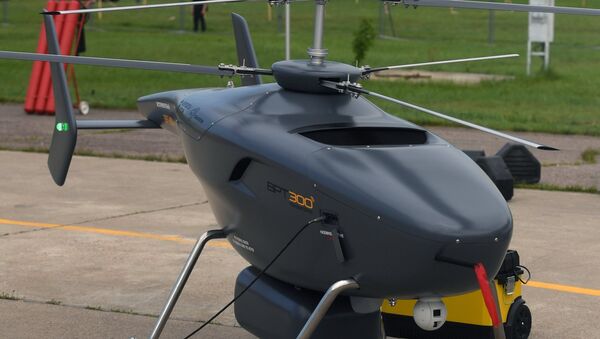 The mass production of the new Russian unmanned VRT300 convertiplane is likely to start at the end of next year, Russian Helicopters company’s press service said Tuesday.

Science & Tech
New Russian Helicopter-Type UAV With Arctic Modification Revealed
ZHUKOVSKIY (Sputnik) – The pilot sample of the VRT300 convertiplane was revealed at the International Aviation and Space Salon MAKS-2017, held in the town of Zhukovskiy in the Moscow Region on July 18-23.

"By the fourth quarter of 2017, the VRT300 convertiplane will enter the second phase of testing, during which it will be tested in various flight regimes, weather conditions and with target payloads. The unmanned aircraft’s serial production is expected to start at the end of 2018," the press service said.

The two-tonnes convertiplane does not require a runway and is capable of both high-speed, level flight and hovering.

Russian Helicopters, one of the world's leading helicopter producers operating as part of Russian state conglomerate Rostec, was established in 2007 and is headquartered in Moscow.