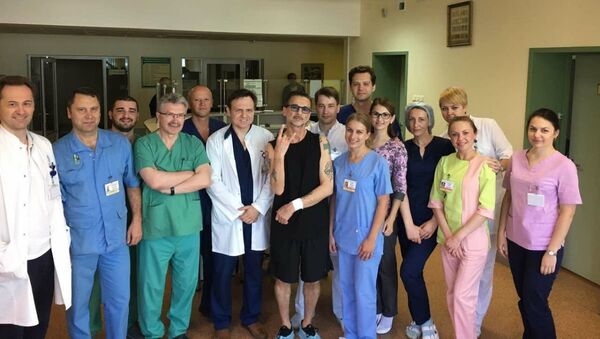 The doctors at the city’s ninth clinical hospital described the musician’s state as “satisfactory.”

Dave Gahan had spent the previous night in the hospital with stomach problems that forced the band to cancel the gig they were scheduled to play in Minsk on Monday evening.

Adding to the doctors’ woes, a big crowd of Depeche Mode fans spent the night outside the hospital hoping to catch a glimpse of their idol.

Before being released a grateful Gave Gahan was photographed with the hospital’s staff.

On Monday Dave Gahan was rushed to the hospital with an intestinal disorder resulting from possible food poisoning.

Sputnik learned that the organizers of the Depeche Mode’s tour, in support of their new album, “Spirit”, were deciding whether or not to call off the band’s Wednesday concert in Kiev.

Luckily, Dave Gahan seems to have fully recovered now and chances are high that he will be back onstage tomorrow.