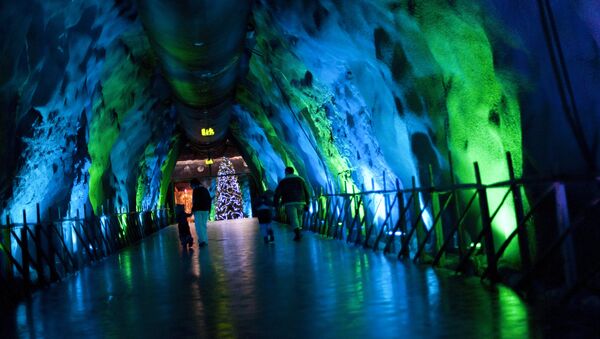 Sometimes it seems like the Nordics' paranoid fear of Russia knows no limitations. Finland reportedly revived its Cold War-era network of tunnels to protect its population from so-called "Russian aggression," which seems to be the perennial bogeyman.

Fear-Stricken Finns Feel Uneasy About Real Estate Being Sold to Russians
Amid unfounded suspicions and implications featuring Russia, domestic security has become a topical issue for Finland. Of late, the "Russian threat" has spurred Finns to go underground, as the Finnish Defense Forces are reviving Cold War-era underground fortifications in the Finnish capital.

At present, Helsinki still boasts a 200-odd kilometer long network of underground tunnels, shelters and passageways, which are being routinely used by Finnish soldiers for training. According to the Finnish newspaper Ilta-Sanomat, the subterranean bunker city, built and expanded since the late 1950s, offers an important tactical advantage, should the Finnish capital ever be attacked.

Today, a significant part of the underground facilities are in civilian use, but can be converted into shelters and command centers within a few days after a declaration of war. According to the Wall Street Journal, Helsinki's tunnels could potentially house up to 600,000 inhabitants, which roughly corresponds to the city's entire population, bar the metropolitan area.

Needless to say, Russia is once again being portrayed as a possible intruder, this time in connection to the major Russian-Belarusian Zapad 2017 exercise to be held in September. The Russian Defense Ministry has repeatedly stressed that the joint exercise is planned and international observers have been invited.

Suomi Snubs Finnish-Russians for Fear of 'Little Green Men'
Finnish military expert Arto Pulkki stressed that Finland "does not fear Russia," yet claimed that Moscow should be taken seriously.

"Russia's involvement in Crimea and Eastern Ukraine has made the Finnish military return to its roots as a standing army. The Defense Forces have acted more in a training mode for a long time, with the army especially now stepping up as a standby force," Arto Pulkki told Ilta-Sanomat.

Pulkki called the underground defenses a "considerable advantage," yet admitted that there are other ways of influencing Finland than direct military aggression, such as disrupting energy distribution.

"The West's overwhelming propaganda about the 'Russian military threat' has given rise to a kind of social schizophrenia in Norway and Sweden, and now it's spreading in Finland," Baranets told Radio Sputnik.

Losing Neutrality: What's Behind US Attempts to Incorporate Finland Into NATO
Baranets ventured that the allegations of Russia's plans to "bomb" Helsinki aim to convince the population of the necessity to abandon the non-alignment policy and join NATO.

"Hence this myth about the 'Russian bear with nuclear fangs.' Well, we have a paranoid product made in Finland. However, it seems to me that Russia's calm neighborly line towards Helsinki will still overcome this new foolishness. Let them dig holes from border to border. In the long run, they will eventually themselves laugh at the politicians who are intimidating the Finnish people," Viktor Baranets concluded.