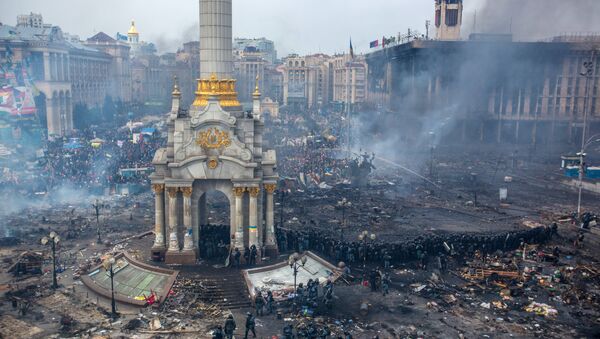 © Sputnik / Andrey Stenin
/
Go to the photo bank
Subscribe
Sputnik met with a man who witnessed the cruel Donbass war with his own eyes. He explained why the issue of the conflict is scarcely covered in Europe and Italy in particular.

He called on the international community to support his proposal. However, for a long time now the EU has kept silent about the Donbass war.

Donetsk Republic Declares Creation of New State of Malorossiya
The question however, remains why the Italian media has been ignoring the conflict that has unfolded in the center of Europe?

Sputnik spoke with Maurizio Marrone, a member of the regional council and the city administration of Turin in an interview, about this issue.

According to him, “the EU understands that it has taken the wrong side in the conflict, that it has a great responsibility and therefore there are constant attempts to censor the reports about this war as much as possible.”

Marrone further said that such censorship is due to the fact that the European Union and the governments of the member countries are involved in this war.

“The ceasefire is never observed. I personally visited Donetsk and Lugansk three times, where I saw with my own eyes how the artillery of Kiev bombed the quarters in which the civilian population lives, which constantly leads to new victims,” he said.

“We wanted to draw the attention of Italian politics to the conflict, which until now has not been discussed. This is a war that indirectly affects the countries of Europe as we are talking about economic sanctions,” he further told Sputnik.

NATO 'Has Already Succeeded in Turning Ukraine Into a De Facto Outpost'
Despite the severity of the situation Marrone stressed that little is said about the conflict in the media.

“Italy is forced to send its military to Latvia within the framework of the NATO mission and at the political level, Rome does not have the courage to refuse the contributions that it is forced to pay to the alliance,” he added.

The conference "Donbass: The War on Conscience of Europe" was held for the first time in the Chamber of Deputies of the Italian Parliament.

Recently, the Office of the United Nations High Commissioner for Human Rights submitted a report in which Ukraine was presented with over 16 claims for such grave crimes as torture, unlawful deprivation of liberty and violation of freedom of movement.

“We are afraid that [Ukraine] can be used [by the European Union and the United States] as a springboard for the siege of the so-called ‘Russian World’. We hope that sooner or later the Italian government will come out of this conflict and reconsider its attitude towards NATO,” Marrone said.

The politician also spoke about a project that he is currently involved in. It is called “101 life” and its purpose is to inform the public about the number of children that have been killed in the conflict, which has already exceeded 100.

He expressed hope that Italy will move towards an alliance with Russia and that the two countries will become trade and economic partners once again.

Marrone also stressed the importance of working together as geopolitical partners in the fight against terrorism.

“We, as part of the Western world, see that Moscow is fighting against Daesh almost alone. We must realize that our enemy is Islamic terrorism, not Russia,” Marrone concluded.

Ukraine Crisis May End With 5 Mln Ukrainians Applying for Russian Citizenship
Meanwhile, the Donetsk People's Republic has declared the establishment of a new country — Malorossiya — which the local leadership described as a successor state to Ukraine.

Malorossiya has been declared as a sovereign federated state with the capital of Donetsk and successor state to Ukraine. The new state's constitution will be approved after a referendum and broad discussion.

The new country will seek to join the union state of Russia and Belarus while keeping its sovereignty.

The Donbass conflict erupted in April 2014 as a local counter-reaction to the West-sponsored Maidan coup in Kiev that had toppled President Viktor Yanukovych in February.

In February 2015, Kiev forces and Donbass independence supporters signed a peace agreement in the Belarusian capital of Minsk.

The deal stipulates a full ceasefire, weapons withdrawal from the line of contact in Donbass, as well as constitutional reforms that would give a special status to the Donetsk and Lugansk People's Republics.

000000
Popular comments
I will posit that perhaps another alternative to settle this issue might be to let the ultranationalist around the Lvov region form their own little country (MaloUkraine?) of ethnically pure Ukrainians that can join EU (if they will have them) and NATO and let the rest of the entire Ukraine return to its mixed ethnic and cultural roots and get along with everybody, EU and Russia alike. Recipe for prosperity if they can overcome the rampant corruption culture across Ukraine...
Lav
18 July 2017, 17:00 GMT3
000000
Nobody and no government in the EU has the balls to tell the Americans to shove that illegal regime change of the Ukraine where the sun doesn't shine. And let the Americans be the only one to carry the burdens of the sanctions they so readily apply on anybody that is not willing to dance to their music.