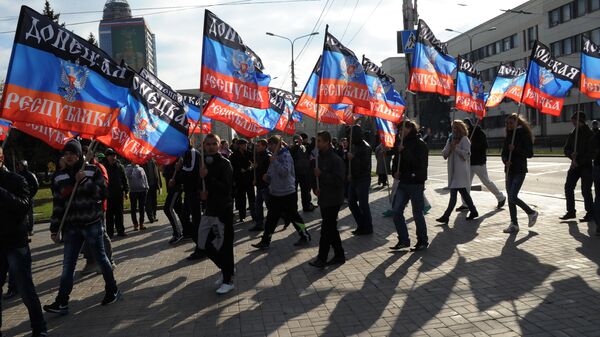 The Donetsk People's Republic has declared the establishment of a new country - Malorossiya - which the local leadership described as a successor state to Ukraine.

"We propose to establish the state of Malorossiya. Malorossiya is an independent young state. A transition period of up to 3 years," Zakharchenko told reporters.

Noting that discussions within the DPR had "come to the conclusion that Ukraine has shown itself as a failed state," he called on the international community to support his proposal.

"We should be supported by the residents of the regions. This solution is possible provided that the international community supports the idea," Zakharchenko said.

Malorossiya has been declared as a sovereign federation of states with wide-ranging autonomy, with the capital of Donetsk and successor state to Ukraine. The new state's constitution will be approved after a referendum and broad discussion. The country's central authorities will be in charge of the federal budget, army and security services, according to DPR Income and Charges Minister Alexander Timofeev.

"We, the representatives of former Ukraine, declare the establishment of a new state, Malorossiya, which is a successor state to Ukraine. We agree that the new state's name will be Malorossiya because the very name of Ukraine has discredited itself. The city of Donetsk becomes Malorossiya's capital," Timofeev said while reading a constitution act on the formation of the new country.

Malorossiya's constitution will state its non-aligned status and policy toward restoring ties with Russia, he added. The new country will seek to join the union state of Russia and Belarus while keeping its sovereignty.

"Malorossiya is a multinational state with Russian and Malorossiyan being its official languages, and regional languages retaining their rights and statuses," Timofeev read.

He noted that in Malorossiya, religions will have equal rights. The state aims at resuming activities within the Commonwealth of Independent States (CIS) and launching trilateral talks with Russia and the European Union.

"The policy aimed at joining the Union State of Russia and Belarus while preserving independence and sovereignty. The keeping of a visa-free regime in agreement with the European Union. De-oligarchisation, uncluding on a legal basis," the minister read out.

Ukraine Military Shells Civilian Infrastructure in Donbass as War Crimes Rage On
The Donbass conflict erupted in April 2014 as a local counter-reaction to the West-sponsored Maidan coup in Kiev that had toppled President Viktor Yanukovych in February. Residents of the Donetsk and Lugansk regions held independence referendums and proclaimed the People's Republics of Donetsk and Lugansk. Kiev has since been conducting a military operation, encountering stiff local resistance.

"The constitution of Malorossiya will be drafted, approved in its initial iteration by the constitutional assembly and then submitted for the nationwide referendum. This will follow the wide public discussion both on the regional and the federal levels," Timofeev pointed out.

Zakharchenko suggested declaring a state of emergency in Malorossiya for three years due to "economic difficulties, possible chaos and a possible war of all against all", and during these three years order shall be restored and the constitution shall be adopted.