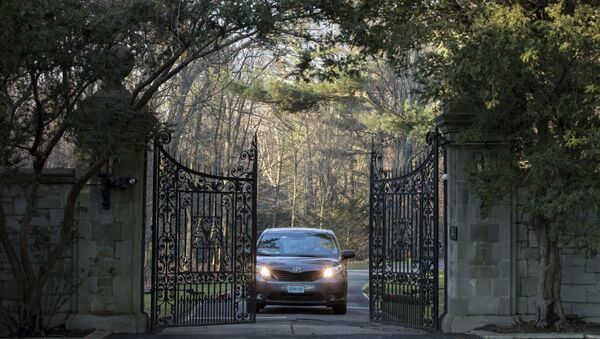 © AP Photo / Alexander F. Yuan
Subscribe
The disagreement between Washington and Moscow about the return of Russia's diplomatic property in the US will be difficult to resolve since both sides look to be digging their heels in, political scientist Grigory Dobromelov told Radio Sputnik.

Kremlin: US Putting Conditions on Return of Diplomatic Property is Unacceptable
The US is willing to give back Russia's diplomatic properties in the US under the condition that it will receive something in return from Moscow, a senior official from the White House told Sputnik on Monday.

In December, the Obama administration seized the properties and expelled 35 Russian diplomats, alleging that they were involved in election interference, an accusation which Moscow denies.

The White House offer to return the property in return for some kind of concession is "unacceptable," Kremlin spokesman Dmitry Peskov told reporters on Monday.

Moscow Warns of Response to Seizure of Russian Diplomatic Property in US
Director of the Institute for Applied Political Studies, political scientist Grigory Dobromelov, told Radio Sputnik that the issue will be tricky to solve, because both sides won't be placated by symbolic concessions.

"I think, most likely, the problem won't be solved: there are too many contradictions, the sides are too far apart. As was clear from the very beginning of this story, this is politics, it is Obama's 'parting gift.'"

"Going forward, the issue is what they are ready to 'exchange.' Russia and the US are in a period of rather complicated negotiations regarding Syria and regarding economic issues. In many respects, this issue is an additional 'bargaining chip' that Obama left for Trump."

"But now, both diplomatic corps are in a paradigm of 'real politics': both Russian and American diplomats aren't paying attention to rhetorical devices and symbolic moves and gestures, they are [only] interested in getting real political resolutions from their opponents, " Dobromelov said.