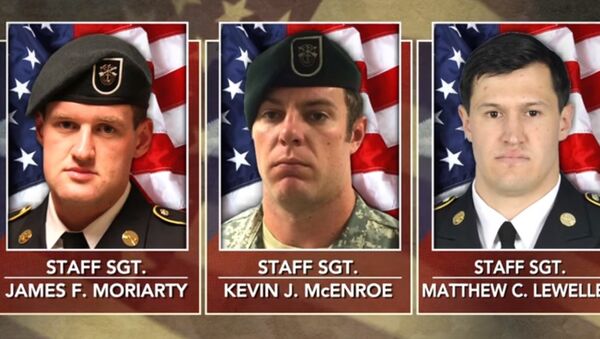 © Youtube/CBS This Morning
Subscribe
On Monday a Jordanian soldier was convicted in military court and sentenced to life in prison for shooting and killing three US Green Berets at an air base in Amman.

First Sgt. Marik al-Tuwayha said he only shot the troops because he thought they may be attacking the base, not out of resentment for Americans. He entered a plea of not guilty.

"I have all the respect for the king, but I was doing my job,” al-Tuwayha said as he was led out of the courtroom.

The three troops were in Jordan working for the CIA training Syrian rebels.

Three gate guards testified in June that they heard what they thought was gunfire from the convoy’s direction, but did not return fire because they could not determine the source of the sound. One witness said al-Tuwayha opened fire at that point, with gunfire continuing for the next several minutes.

Jordan initially claimed that the shooting began after Americans violated entry rules, but they later withdrew this claim, the Canadian Press reported.

According to a statement released Monday by the US Embassy, the trial "confirmed that the deceased US service members followed all established procedures when accessing the base the day of the incident, as we have noted before."

"We are reassured to see the perpetrator brought to justice."

A life sentence in Jordan can mean 20 years incarceration with the possibility of receiving time off for good behavior, prompting some of the victims’ family members to call for the death penalty, as they feel the prison sentence isn’t severe enough.

Matthew Lewellen’s father, 53-year-old Charles Lewellen said the sentence "won't take the pain away," but at least it proved "what we have been saying all along… that he murdered our sons."

His mother Cynthia Lewellen, remarked, "In this verdict, nobody comes out happy … I mean for us as losing our sons and knowing the man that killed him will spend 20 years in prison, but also for his family that because of his actions… lost a father, a husband, a provider."

"We are pleased to see that the perpetrators have been brought to justice," Pentagon Spokesman Navy Capt. Jeff Davis said, praising Amman for its handling of the case.