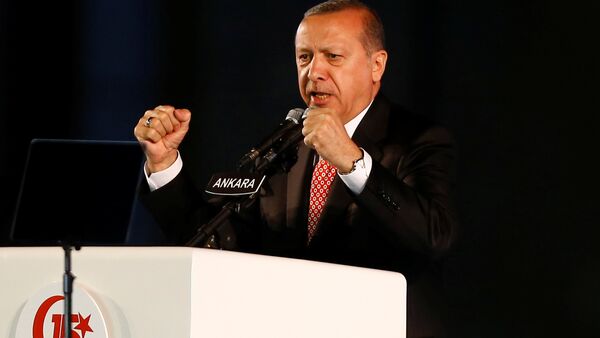 © REUTERS / UMIT BEKTAS
Subscribe
At the weekend (July 15-16), Turkey's President Erdogan made a blood-curdling speech on the anniversary of the 2016 coup, threatening to "cut off the heads" of the plotters. But even if he restored the death penalty could he execute the ringleaders of the coup?

Turkey's President Recep Tayyip Erdogan used the occasion of the first anniversary of the attempted coup against his government to repeat his threat to resume executions.

​Turkey has not executed anyone since Hidir Aslan, a communist and member of the Dev Yol terrorist group, was hanged for high treason in October 1984, but the death penalty was not completely abolished until 2004.

At the time Turkey was hopeful of joining the European Union and removing the death penalty was one of the prerequisites for joining the bloc.

But in the last couple of years, relations between Brussels and Ankara have become increasingly frosty, and President Erdogan appears to have turned away from Europe as he is looking more in the direction of the Middle East.

On the night of July 15-16 a group of plotters within the Turkish Army and Air Force launched a coup in Istanbul and Ankara, but it collapsed within hours after President Erdogan escaped and urged citizens to come out onto the streets to resist the plotters.

Eventually forces loyal to the elected government regained control and the rebels who, realizing the coup did not have the support of public opinion,  began to surrender in large numbers. 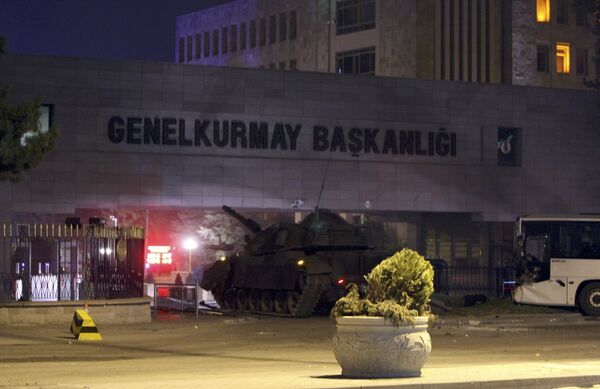 A tank is seen in front of the gate of the General Staff headquarters during an attempted coup in Ankara, Turkey July 16, 2016.
© REUTERS / Stringer

But 290 people were killed and more than 2,000 wounded during the night of the coup and those on the loyalist side who were killed are now referred to as "martyrs" by the Erdogan regime and by the Turkish media.

July 15 has now been named Democracy and National Unity Day and thousands came out in Ankara to mark the occasion at the weekend.

Public opinion is largely behind President Erdogan, who won a referendum in April, giving him greater powers as the head of state.

But many opposition figures fear he is exploiting the coup for his own political reasons.

The leader of the CHP, the main opposition party, Kemal Kilicdaroglu, stayed away from the weekend rally and has repeatedly described the event of July 2016 as a "controlled coup."

The CHP was created by Kemal Ataturk, the founder of modern Turkey, and many Turks feel Mr. Erdogan is undermining the last vestiges of secular rule.

In the months since the coup, President Erdogan has claimed it was led by elements within the military which were loyal to Fethullah Gulen, a cleric who was once a close ally of Mr. Erdogan, but now lives in exile in the United States.

Tens of thousands of civil servants, judges, academics, journalists, police and military officers have been purged or imprisoned since the coup, accused of support for Gulen.

During his speech to a huge crowd at the weekend, Mr. Erdogan railed at the "scoundrels," "traitors" and "unbelievers" involved in the coup.

Many in the crowd chanted "Idam isteriz! (We want execution!)" and Mr. Erdogan said he would happily sign off on the restoration of the death penalty if it were approved by the parliament in Ankara.

He said he would "cut the heads off" traitors but it was not clear if he was threatening to execute the plotters. 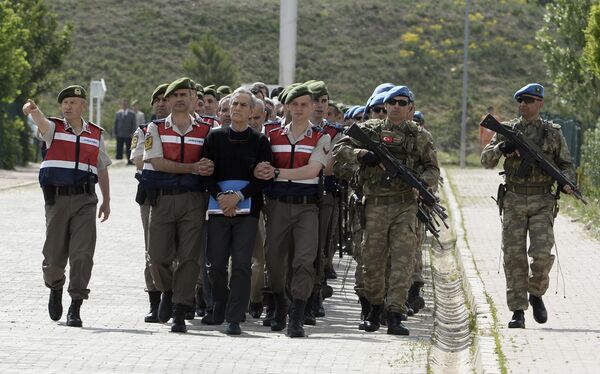 More than 220 defendants, including the former head of the Turkish air force, General Akin Ozturk, went on trial in May.

Considering there was no death penalty on the statute books in July 2016, it would be considered highly irregular, and against international law, if he were to apply the sentence retrospectively on Ozturk and his co-defendants.

"If Turkey were to introduce the death penalty, the Turkish government would definitively slam the door on EU membership," wrote Jean-Claude Juncker, the president of the European Commission, in a German newspaper on Sunday (July 16).