'Did They Think It Through?' What Biometric Controls With Russia Will Cost Kiev 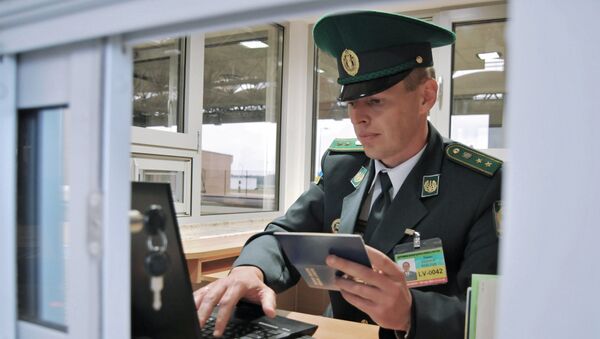 Unable to push through plans to introduce visas for Russian citizens traveling to Ukraine, Kiev has introduced biometric controls instead. Pointing out that the measures may end up adversely affecting one third of Ukraine's population, Radio Sputnik contributor Svetlana Kalmykova asked whether Kiev had even bothered to think the decision through.

Last week, Ukraine's National Security and Defense Council announced that Ukraine would be introducing biometric controls (including fingerprint and retina scans) on the country's borders starting in January 2018. Council head Oleskandr Turchynov said explicitly that the decision was primarily designed to target Russian citizens, who will also be made to undergo electronic preliminary registration prior to their arrival, and to inform authorities of the duration and purpose of their trip, and how long they intend to stay.

The new measures will effectively introduce restrictions on the visa-free travel agreement between the Russia and Ukraine, which has allowed millions of citizens from both nations to travel, live, and work in the other's country without a hassle.

Russia May Take Retaliatory Measures Over Ukraine's Entry Restrictions - Senator
Moscow has said that it regrets Kiev's move, and sees the new effort to sever Russian-Ukrainian contacts as an attempt to build a new 'Berlin Wall'. Officials have also warned that Russia is considering retaliatory measures. Senator Franz Klintsevich said that a Russian response could affect millions of Ukrainians living and working in Russia.

In a brief commentary on Kiev's decision, Radio Sputnik contributor Svetlana Kalmykova recalled that experts are already calculating how much it will cost the country. "According to preliminary estimates, we're talking about hundreds of millions of hryvnia."

For one thing, from a technical standpoint, electronic registration will require the creation of a special database, with Russian citizens living in Ukraine entered into a special registry. It's worth noting, Kalmykova noted, that "Kiev does not presently have the technical capability to implement all of this. Some border crossing points are already equipped with biometric readers. However, when the policy enters into force, the border forces will require many more of them –and not just stationary readers, like in airports, but mobile ones – in railway cars and at automotive checkpoints," as well.

Millions of Dollars Stolen From Ukrainian 'Border Wall With Russia' Project
In total, Ukrainian authorities said they will allocate an additional 600 million hryvnia (about $23 million US) for the purchase of new equipment. An interesting budget decision in a country where 60% of the population can no longer afford to pay skyrocketing utility bills.

In other words, Kalmykova noted, "authorities in Kiev have once again demonstrated that they are willing to do anything and everything to break from Russia. No matter the price there is to pay for this – including for ordinary people."

"After all, Moscow may adopt a symmetrical response, and introduce biometric control and mandatory registration for Ukrainian citizens; this would affect not only the nearly five million Ukrainians temporarily or permanently working in Russia, but also their ten million plus family members back in Ukraine. This is almost a third of the country's population," the observer added.

Ukraine Crisis May End With 5 Mln Ukrainians Applying for Russian Citizenship
According to statistics from the World Bank, Ukrainians in Russia contributed over $3.1 billion in remittances to Ukraine in 2015.

"Moscow understands this, and therefore is not hurrying with radical measures. The Russian Foreign Ministry has said that for now, they will monitor whether these 'innovations' in Kiev are in line with the current bilateral visa- free travel agreement for Russian and Ukrainian citizens," Kalmykova concluded.