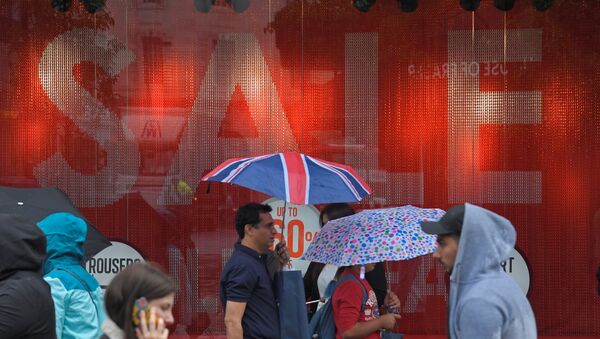 The Office for Budget Responsibility has said the UK's public finances are in bad shape – such bad shape, the country would suffer even more greatly than during the financial crisis if a recession took hold, an increasingly likely eventuality with Brexit looming on the horizon.

In its first fiscal risk report, the OBR said another recession was inevitable — and Prime Minister Theresa May's failure to win a parliamentary majority in June's general election had left the public finances even more vulnerable to being blown off course than in 2007.

​"Governments should expect nasty fiscal surprises from time to time — because policy can only reduce risks, not eliminate them — and plan accordingly. They have to do so in the context of ongoing pressures likely to weigh on receipts and drive up spending and a variety of risks governments choose to expose themselves to for policy reasons. This is true for any government, but this one also has to manage the uncertainties posed by Brexit, which could influence the likelihood or impact of other risks," the report stated.

UK Brexit Secretary Says London Will Not Pay $109Bln of 'Divorce Bill' to EU
While the UK's Brexit divorce bill — currently being disputed by London and Brussels — is expected to have little impact on the wider economy, even a small fall in the country's underlying growth rate post-secession would lead to a huge increase in the overall debt burden.

Underlining this, the OBR forecasts if reduced trade with Europe caused productivity to slip by a mere 0.1 percentage point over the next 50 years, tax receipts would be US$46.7 billion (£36 billion) lower. With spending growth left unchanged, debt-to-GDP ratio would end up around 50 percentage points higher.

Brexit is not the only threat to the UK economy identified by the OBR. A hung parliament and "austerity fatigue" — and longer-term developments such as a rapidly ageing population — are also factors putting upward pressure on finances. Higher interest rates and inflation likewise pose significant risks.

Ministers have been lobbying for extra funds, to give additional support to ailing public services and offset the most severe cuts in welfare spending. The deficit is due to rise from 2.4 percent to 2.9 percent by the end of 2017, following a deterioration in the country's economic outlook. This could rise even higher if pressure on the Treasury to increase spending is successful.

Ominous Indicators: The Key Signs Brexit Is Already Damaging the UK Economy
To judge the sensitivity of the public finances to shocks, the OBR conducted stress tests on the UK exchequer — checks to confirm finances are sound, with sufficient reserves to guard against unexpected seismic economic shocks. It found the UK's annual deficit could rocket to 8.1 percent of GDP, and debt to GDP ratio could match Italy's at 114 percent. The annual deficit in 2015/2016 was 2.6 percent of GDP — its lowest level since 2007-08 — and debt-to-GDP ratio 85 percent.

​The OBR's stark caution comes as Chancellor Phillip Hammond prepares to outline the Autumn Budget. The watchdog calls on ministers to manage risks better, prepare for shocks and deal effectively with sources of slow-building pressure —although both the Conservatives and Labour will find the conclusions uncomfortable. While accusing the government of leaving public finances "much more sensitive" to shocks during their seven years in government, it also suggests concentrating the tax burden on the wealthiest, and imposing tighter regulations on the financial sector — as advocated by Labour in the party's 2017 manifesto.

"Hard Brexit poses a real threat to our economy. People voted for £350 million [US$455 million] a week for the NHS, not a £36 billion [US$47 billion] black hole in the public finances that could mean severe cuts to the NHS.  The Government are meant to base their fiscal policies in part on the OBR's assessments. When their warnings about the potential consequences of hard Brexit are so stark, Ministers should wake up and put Single Market membership — the best economic outcome for our country — back on the table," he said.

The report likely confirms what many average Britons already feel about the state of Britain's economy.

"I think the economy might be on the brink of collapse. The government has tried to fix the last recession with gaffer tape. We almost need to have another recession to take the economy back to where it should be," one individual told Spuntik.

"There's a real dearth of jobs and opportunity. It's not a pleasant environment to be applying for jobs in, often your applications are just ignored. It's pretty gloomy — based on what I know about neoliberal economic arrangements, I'm not particularly hopeful things will change for the better in future either," a recent university graduate said.