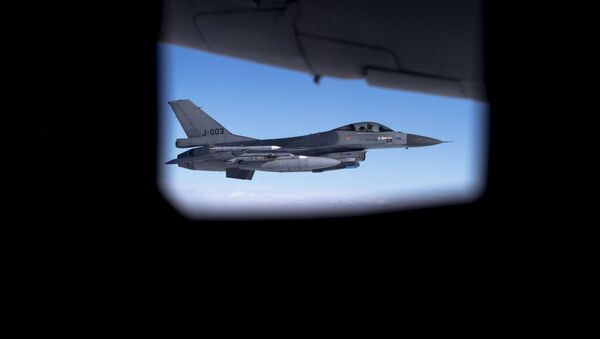 Is NATO Preparing for 'Military Aggression Against Russia'?
The Russian Defense Ministry said on its website that Russian jet fighters have conducted at least six intercepts of foreign reconnaissance planes near Russia's borders in the past week.

In mid-June, 14 such intercepts were carried out by Russian warplanes, according to the official newspaper of the Russian Defense Ministry Krasnaya Zvezda (Red Star).

On June 21, a NATO F-16 fighter aircraft attempted to approach the plane carrying Russian Defense Minister Sergey Shoigu over neutral Baltic waters, but was promptly chased away by a Russian Su-27 fighter jet.

Speaking to Sputnik, Russian military expert Boris Rozhin recalled that the past few years have seen more and more NATO reconnaissance near Russia's borders. At the moment, he says that this activity is connected to NATO's drills in the Baltic States.

Pentagon Reveals Photos of Russian Su-27 Intercepting US Military Aircraft
Earlier this week, Politico quoted a NATO official said as saying that the alliance will express its frustration about "the aggressive and dangerous maneuvers of Russian military pilots over the Baltic Sea" during a Russia-NATO Council meeting.

Golovatyuk told Spuntik that even though NATO planes often violate rules applying to flights over neutral waters, the alliance does not think twice before pointing the finger at Russia.

"I believe that NATO was simply frightened about our flights over the Baltic Sea and the Kaliningrad region, where we have a large military grouping, so they think that these flights are allegedly unsafe and can cause incidents. There are specific rules for flying over neutral waters, and we do not violate them, and we do not enter any territory," Golovatyuk said.

He referred to a recent incident with a NATO fighter jet which tried to drive a Russian transport plane into a zone of turbulence. "And only the appearance of our fighter prevented negative consequences," according to Golovatyuk.

"So they [NATO members] themselves are not very clean in this respect, and let them first pull out the 'log' from their own eyes, before they start to blame us," he added.

"For example, NATO planes will provoke our military pilots in order to accuse us of some unsafe actions. It's clear that any such situation may lead to a catastrophe and the main thing is not to react to these provocations," he concluded.

Russian Su-27 Vs. US RC-135: 'Russian Spy Jets Don’t Fly Along US Borders'
On June 20, Russia scrambled its fighters to intercept a US Boeing RC-135 surveillance plane, and on June 6 Russian fighters intercepted a US B-52 strategic bomber which attempted to approach Russia's borders; both intercepts took place over the Baltic Sea.

In June, Russia's MiG-31 and Su-27 fighters were scrambled in response to 23 flybys, most of them by US planes, according to Krasnaya Zvezda.

The newspaper estimated that US RC-135 planes and Global Hawk drones had been involved in ten reconnaissance missions; four such mission were conducted by Norwegian P-3 Orions, and three by Swedish Air Force's Gulfstream intelligence planes.

000000
Popular comments
FeEisi, I think theyre playing it smart. NATO is looking for any reason to justify its existence and for that they need to play off Russia as the bad guy. Shooting down a NATO jet outside their territory would give them the pretext theyre looking for. Russia and China are sitting back and letting the West bankrupt itself.
dc801
14 July 2017, 16:59 GMT2
000000
Even history becomes NATO weapon against Russia medium.com/@adomas333/is-history-a-new-nato-weapons-against-russia-f3e9799dc68f
Adomas
14 July 2017, 16:54 GMT
000000
Newsfeed
0
New firstOld first
loader
LIVE
Заголовок открываемого материала
Access to the chat has been blocked for violating the rules . You will be able to participate again through:∞. If you do not agree with the blocking, please use the feedback form
The discussion is closed. You can participate in the discussion within 24 hours after the publication of the article.
To participate in the discussion
log in or register
loader
Chats
Заголовок открываемого материала
Worldwide
InternationalEnglishEnglishMundoEspañolSpanish
Europe
DeutschlandDeutschGermanFranceFrançaisFrenchΕλλάδαΕλληνικάGreekItaliaItalianoItalianČeská republikaČeštinaCzechPolskaPolskiPolishСрбиjаСрпскиSerbianLatvijaLatviešuLatvianLietuvaLietuviųLithuanianMoldovaMoldoveneascăMoldavianБеларусьБеларускiBelarusian
Transcaucasia
ԱրմենիաՀայերենArmenianАҧсныАҧсышәалаAbkhazХуссар ИрыстонИронауОssetianსაქართველოქართულიGeorgianAzərbaycanАzərbaycancaAzerbaijani
Middle East
Sputnik عربيArabicArabicTürkiyeTürkçeTurkishSputnik ایرانPersianPersianSputnik افغانستانDariDari
Central Asia
ҚазақстанҚазақ тіліKazakhКыргызстанКыргызчаKyrgyzOʻzbekistonЎзбекчаUzbekТоҷикистонТоҷикӣTajik
East & Southeast Asia
Việt NamTiếng ViệtVietnamese日本日本語Japanese俄罗斯卫星通讯社中文（简体）Chinese (simplified)俄罗斯卫星通讯社中文（繁体）Chinese (traditional)
South America
BrasilPortuguêsPortuguese
NewsfeedBreaking
13:57 GMTUK Heavyweight Joshua Unlikely to Have Broken Eye Socket, Promoter Says
13:45 GMT'Three Civilians Killed in US Airdrop Operation' in Syria's Deir ez-Zor
13:21 GMTIraq Arrests Activists, Ministry Employee for Calls to Normalise Ties With Israel
13:20 GMTMali to Explore New Security Partnerships As France Ends Sahel Operation
13:18 GMTMerkel's Potential Successor Laschet Reveals His Vote Preference in Election Blunder
13:11 GMTWomen to Dominate Iceland's Parliament for First Time Ever, Reports Suggest
13:09 GMTBlast Kills Taliban Intelligence Officer in Eastern Afghanistan, Source Says
13:00 GMTGermans Head to Polls to Choose New Bundestag
12:51 GMTDozens of New Yorkers Stage Anti-Vaccine Protest at a Food Court Chanting F**k Joe Biden
12:41 GMTFour Inmates Dead, One Injured in Attempted Jailbreak in Philippines, Reports Suggest
12:40 GMTVirginia Giuffre to Reportedly Hand Prince Andrew Secret Doc Able to Defeat Her Lawsuit
12:37 GMTRussia Scrambles Three Su-35 Jets to Escort US B-52 Bomber Approaching Border in Pacific Ocean
12:32 GMTCyclone Gulab Likely to Make Landfall in India on Sunday Evening
12:21 GMTUN Chief Warns 'Humanity Unacceptably Close to Nuclear Annihilation'
12:09 GMTKremlin Says It Hopes for Consistency on Minsk Agreements From Germany After Merkel Leaves
12:02 GMTRussian Presidential Spokesman Says Gazprom Fulfilling All Obligations
11:54 GMTLabour Leader Says It's 'Not Right' to Say Only Women Have a Cervix
11:43 GMT'F**k Them': Carlson Responds to Yet Another Call to Fire Him Over 'Great Replacement' Theory
11:42 GMT'Piece of Scum': UK Labour Deputy Leader Lashes Out at Tories
11:14 GMTUK Transport Minister Calls on Britons to Behave Normally, Says There is No Shortage of Fuel