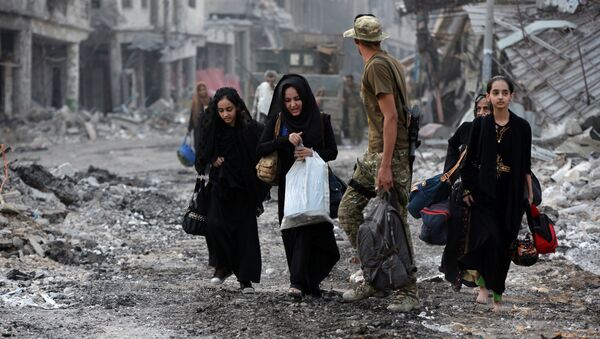 © REUTERS / Stringer
Subscribe
Footage is circulating online purporting to show Iraqi security forces kicking, beating and shooting what appear to be captured Daesh fighters in the embattled city of Mosul.

​One day after Iraqi Prime Minister Haider al-Abadi declared "total victory" in Mosul on Monday, the first video appeared online. The video depicts men in military uniforms shouting at and attacking other men. One of the attackers is spattered with fresh blood, while the unmoving bodies of the attacked men are dragged from the room.

"Is this one with Daesh or not?" one of the uniformed men asks, gesturing to a man in the corner. The other men in uniforms drag him outside, to the edge of a high wall. There, the camera captures more uniformed men shooting the bodies of the men dragged outside earlier, and a fourth man being executed in the background.

The men then throw their captive off the wall, whereupon he falls 30 feet to the ground. The soldiers then shoot him multiple times as well.

Another video posted the same day was titled: "Our heroes in the Iraqi Army 16th division executing the remnants of Daesh terrorists in Old Mosul." This one shows a man in an Iraqi army uniform executing an unarmed, kneeling man.

Although unconfirmed, the video appears to be Iraqi soldiers killing Daesh fighters. The videos were posted on pro-Iraqi (but not government-affiliated) Facebook pages.

Brigadier General Yahya Rasool, a spokesman for US Forces in Iraq, said in a statement that the US military was "keenly observing and following what is being published in social media outlets about the conduct of a number of our soldiers, or those who are wearing uniforms."

"We are following this affair very closely, and all the leadership of Iraqi forces and military are keen to know the details of this matter," he added. "If there's any violation of human rights from any force – counterterrorism forces, police, army, they will be held accountable militarily and we will be really severe.

A statement from Human Rights Watch (HRW) said that they used satellite imagery to confirm that the incident occurred in Mosul. HRW senior Iraq researcher Belkis Wille condemned the violence to the BBC, saying that "these horrific reports of mistreatment and murder have been met by silence from Baghdad, only further fostering the feeling of impunity among armed forces in Mosul."

"In the final weeks of the battle for west Mosul, the pervasive attitude that I have observed among armed forces has been of momentum, the desire to get the battle wrapped up as quickly as possible, and a collapse of adherences to the laws of war," added Wille.

After three years of brutal Daesh rule, Mosul has been liberated by US-backed Iraqi security forces. The nine-month siege to oust the terrorists saw tens of thousands of deaths as well as "house by house" urban warfare.

The bitter fighting now seems to be followed by vengeance killings from Iraqi Security Forces against defeated Daesh fighters. The United Nations High Commissioner for Human Rights issued a statement after the victory of security forces warning that that unpunished "human rights challenges" would "likely spark further violence and civilian suffering."

"Horrific though the crimes of ISIL [Daesh] are, there is no place for vengeance," the statement added.

HRW also reported that security forces were relocating women and children with alleged ties to Daesh to a camp meant to give them "psychological and ideological rehabilitation," according to a Mosul government directive.

HRW claimed that the camps were punitive in nature. "Iraqi authorities shouldn't punish entire families because of their relatives' actions," said Lama Fakih, the deputy chief of HRW's Middle East and North Africa office, in a statement. "These abusive acts are war crimes and are sabotaging efforts to promote reconciliation in areas retaken from ISIS [Daesh]."

000000
Popular comments
To be honest you reap what you sow.. not gonna have sympathy with people that used to kill innocents......here they're guilty period.

Jet fuel can't melt steel beams
14 July 2017, 23:59 GMT6
000000
They should be hanged for their crimes only after due process, something like the Nuremberg Trials... There once was the idea that humans have unalienable rights, even the bastards.