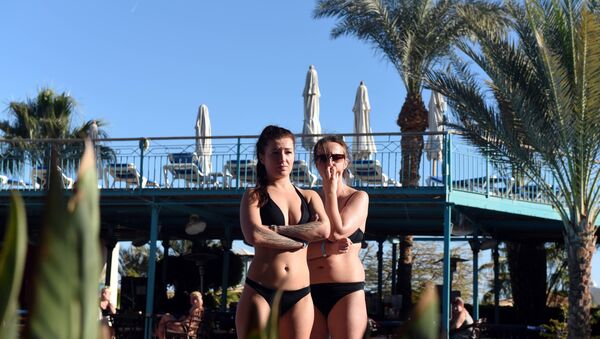 © AP Photo / MOHAMED EL-SHAHED
Subscribe
The spokesman for the Egyptian prime minister's office, Ashraf Sultan, said that the office is in charge of the investigation into the deadly stabbing attack in the resort town of Hurghada.

Security Measures Boosted in Egypt’s Hurghada After Hotel Knife Attack - Source
MOSCOW (Sputnik) – The office of the Egyptian prime minister is in charge of the investigation into the deadly stabbing attack in the resort town of Hurghada, the Egyptian Tourism Ministry told Sputnik on Friday.

Earlier in the day, media reported that two Ukrainian tourists were killed in a knife attack in a Hurghada hotel. Four others were reportedly injured. A head of a tour company later told Sputnik that the victims were German.

"Yes, we can confirm the stabbing in Hurgada but the PM office took over the situation and we cannot provide you with any additional comments," the ministry said.

"It was one person who did it, he was caught by the police and we are investigating him. I can tell you that two persons are dead but I do not have any details on their nationality. I do not have any additional information on those who can be injured. We are doing a statement soon. We are working on it," Sultan said.

Earlier in the day, Doaa Refaat El Nahas, Director of Sales & Marketing at Sunny Days Egypt Hotels, told Sputnik that two hotels in Hurghada had been targeted in the deadly attack — first the Zahabia Hotel, then the Sunny Days El Palacio resort. A source in Hurghada’s tourism sector told Sputnik said that the security measures in the Egyptian resort and on the entry points to the city had been tightened after the attack.