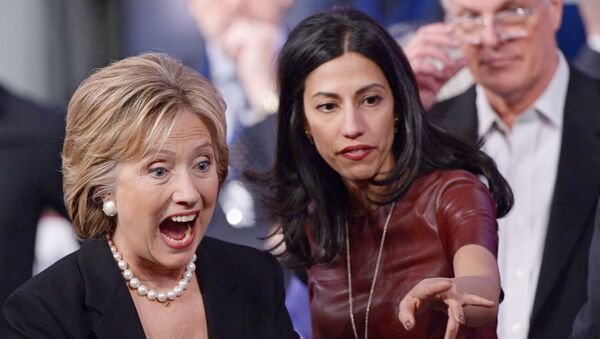 "Judicial Watch today released 448 pages of documents from the US Department of State revealing new incidents of Huma Abedin… providing special State Department treatment to major donors to the Clinton Foundation and political campaigns," the statement said on Friday.

The heavily redacted emails from Abedin's private account show a flow of requests for favors between Clinton's State Department and the Clinton Foundation.

In a June 19 email from Hillary Clinton's brother to Abedin, Tony Rodham acted as a go-between by passing on a letter for Hillary from a Clinton Foundation donor, Richard Park, Judicial Watch said.

Dow donated between $1 million and $5 million to the Clinton Foundation and the Clinton Global Initiative.

In another email from November 2009, Clinton donor Ben Ringel asked Abedin for help in getting an Iranian woman a visa to come to the United States.

"We need to get her clearance even only temporary to be with her granddaughter," Ringel wrote.

Abedin forwarded the request to Lauren Jiloty, asking her "Can you help Monday with consular affairs?"

Jiloty replied, "Sure. Will look into it."

The emails were released in response to a court order from a May 5 lawsuit that Judicial Watch filed against the State Department.